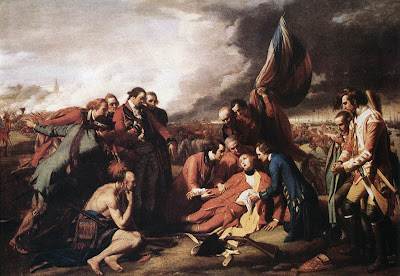 When Benjamin West burst onto the English art scene in 1763, the brash American with a head full of Raphael and Titian thanks to his recent travels in Italy made few friends when King George III commissioned West to paint the royal family. Sir Joshua Reynolds and others turned their backs on the young artist they saw as too ambitious in infringing upon “their” territory. By 1768, however, West’s personal charm and artistic talent won the English artists over and he joined them in founding the Royal Academy of Arts, eventually succeeding his friend Reynolds as the academy’s second president in 1792. Born October 10, 1738, West stands as one of the first great American artists, yet the majority of his great works have nothing to do with America. West’s breakout work The Death of General Wolfe (above, from 1770) turned heads with its dramatic rendition of the final moments of the life of British General James Wolfe during the Battle of Quebec. By posing Wolfe as a fallen Christ figure, literally ripping off the composition and figures of the Renaissance, West fit in with the art ethos of the time in history painting. However, by allowing the figures to wear contemporary dress and not shrouding them in the togas of classicism, West changed the rules of the game, ambitiously aiming at a type of realism not seen before in history painting that opened the doors for Jacques-Louis David and his Neoclassicism on the verge of Romanticism. 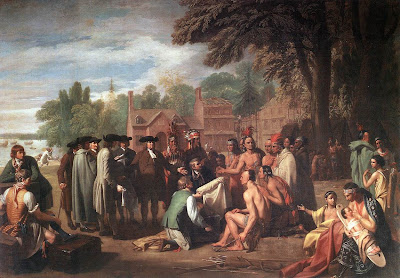 Growing up in Philadelphia, it was hard not to see the works of West. The PAFA features two works by West that bookend their main staircase. To see these huge works you almost have to stand on the opposite side of the stairs, since there’s not enough room to back away from them without tumbling over the railing. A smaller work at the PAFA, West’s The Treaty of Penn with the Indians (above, from 1771-1772), presents an idealized version of the transaction in which William Penn secured land from the Native Americans to extend Pennsylvania. West reportedly first learned how to mix colors from the Native Americans living in Springfield, Pennsylvania, his birthplace (not far from where I live today). Like Penn, West was a Quaker and applied that sect’s principles of brotherhood and pacifism to Native Americans even when most whites considered them less than human. 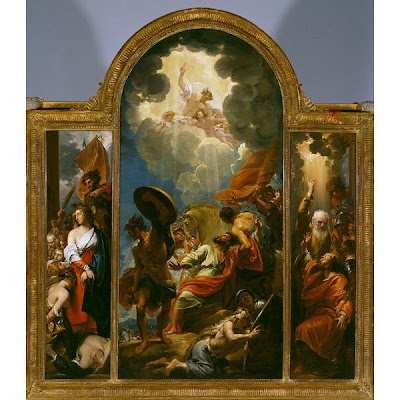 It’s easy to discount the works of West today. Although he was hailed as “the American Raphael” in his day, many of his figures in his epic-sized works seem cartoonishly stilted today. The great draftsmanship of smaller works such as his altarpiece titled The Conversion of St. Paul (above, from 1786) is largely forgotten today, although he exhibited it to great acclaim during his lifetime. If critics can’t be converted to West’s talent, they should at least be open to accepting his role as a pivotal figure in early American painting. While living in London, West opened his doors to any American artist looking for guidance or a place to stay on their way to study in Europe. Such artists as Gilbert Stuart, Charles Willson Peale, John Singleton Copley, Washington Allston, John Trumbull, Thomas Sully, and Samuel F. B. Morse all spent time in West’s studio and home, learning with the master. Matthew Pratt actually painted a tribute to West’s open house titled The American School. Like later critics, many of these artists rejected West’s teachings after accepting his kindness, but West had greater ambitions for American art than the simple continuation of his personal style.

Thank you so much for this post! I am in the middle of getting Benjamin West's painting of St. pauls conversion tattooed as a sleeve on my left arm. Learning more about him and about his life has really been interesting for me. Thank you again for your blog. I will send you a picture of it when it's done! Thanks again....