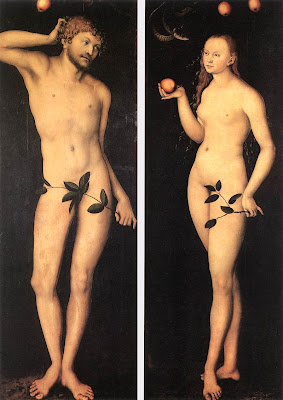 Painting one of the oldest stories ever told, Lucas Cranach the Elder puts his own unique spin on the first couple, Adam and Eve (above, from 1528). Born 1472, Cranach lived through the Renaissance and the Protestant Reformation, both of which shaped the direction of his religious faith up until his death on October 16, 1553. With complete disregard for human anatomy, or even the differences between male and female anatomy, Cranach paints Adam and Eve with long, slender limbs, androgynous to the point of being almost inhuman. Eve’s body differs little from that of Adam except for two tiny breasts stuck onto her chest like scoops of ice cream. She offers the fateful apple to Adam with a sly, knowing smile. Despite their barely covered nudity, there’s no sexual tension between them. The panels of the diptych separate them physically as much as their body language creates emotional distance. Just as his friend Martin Luther reworked the Bible into the vernacular, Cranach reworks the old tale and its common treatment into the visual vernacular of his quickly changing world. 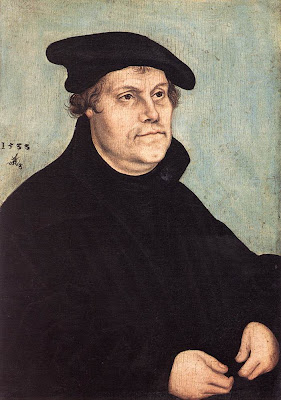 Cranach and Luther teamed up in 1520, when Luther began to question the church’s authority and just a year before the throwdown at the Diet of Worms in 1521 that earned Luther his excommunication and split the Christian world asunder forever. Cranach’s Portrait of Martin Luther (above, from 1543), one of the many portraits Cranach painted of the theologian, shows Luther relaxed and confident in the choices he has made. Cranach allowed Luther to print his vulgate Bibles on his presses in the print shop where Cranach produced the anti-Catholic woodcuts that humorously and effectively portrayed the failures and flaws of the established church. When Luther married Katharina von Bora, a bold move for a man of the cloth, Cranach was present. When Luther and his wife gave birth to their first child, Cranach stood as godfather. The bond between the two men was as inseparable as the link between Luther’s goals for the new church and Cranach’s goal of a new visual vocabulary for that church. 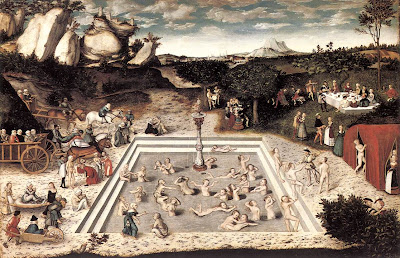 Near the end of his life, Cranach painted an unusual work titled The Fountain of Youth (above, from 1546). In an imaginary place of Cranach’s devising, fragile old women ride in from the left on carts and stretchers. Doctors examine them before they dip naked into the waters. In the rejuvenating waters, the marks of age disappear and the old women emerge on stage right as young maidens, who then join in the dancing and feasting. The waters of the magical pool pour from a statue of Venus and Cupid, the classical figures of love. Facing old age and death himself, Cranach seems to be saying that the eternal life promised by religion can only be found in love. All three of Cranach’s sons became painters, carrying on the family name and continuing the print shop where their father once worked side by side with Luther to change the world. Through his sons, Cranach left behind the only legacy he could control—love.

So, why do Adam & Eve have belly buttons??