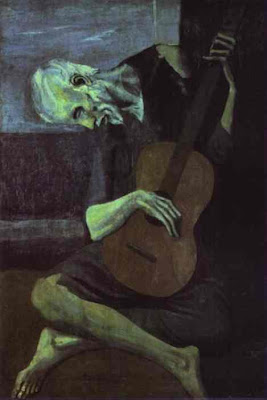 If music be the food of love, play on;
Give me excess of it, that, surfeiting,
The appetite may sicken, and so die.
That strain again! it had a dying fall:
O, it came o'er my ear like the sweet sound,
That breathes upon a bank of violets,
Stealing and giving odour! Enough; no more:
'Tis not so sweet now as it was before.
O spirit of love! how quick and fresh art thou,
That, notwithstanding thy capacity
Receiveth as the sea, nought enters there,
Of what validity and pitch soe'er,
But falls into abatement and low price,
Even in a minute: so full of shapes is fancy
That it alone is high fantastical.

—From Twelfth Night by William Shakespeare

Music and art have always coexisted as close “sister” arts. The non-rational aspects of each medium naturally go hand in hand. Although he had little technical knowledge of music or musical instruments, Pablo Picasso painted musicians and their instruments throughout his career. Born October 25, 1881, Picasso made gaffes such as incorrectly assembled instruments or instruments placed in the wrong hand, but he always seemed to get at the spirit of music with little problem. The Old Guitarist (above, from 1903), painted during Picasso’s deep depression known as the Blue Period, shows a blind beggar playing a guitar on a street corner for money. The blind man’s limbs seem to flow about the canvas like the lines of music he plays. You can almost here the somber tune the man plays on his guitar. Growing up in Barcelona, Picasso undoubtedly saw similar figures in their ragged clothing hoping to exchange their artistry for another moment of survival. Nothing in this picture approaches realism, but the mood and emotions conveyed are amazingly realistic, making you feel as if you were passing this man on a corner, fingering the coin in your pocket before you tossed it into his cup. 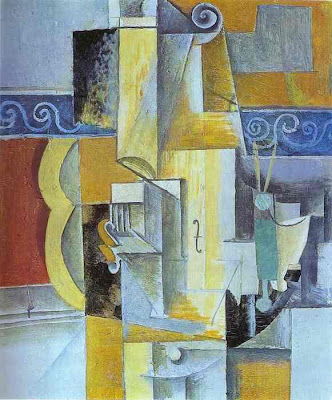 After Picasso moved past the depression of his Blue Period and the romantic elation of his Rose Period, he plunged himself into the intellectualism of Cubism. Picasso’s Violin and Guitar (above, from 1913) stands as just one of the many works in which Picasso takes musical instruments and explodes them in the Cubist style. Cubism’s disassembling masked Picasso’s inability or unwillingness to accurately depict such instruments. In contrast to The Old Guitarist, Picasso’s Violin and Guitar lacks any human element, both visually and emotionally. Picasso reportedly knew next to nothing about classical music and had no desire to learn, choosing instead to stick to the Spanish folk and street music of his youth. These Cubist musical instruments might be Picasso’s violent reaction to classical music, which he may have saw as just another component of the stale, establishment art world that his new art movement challenged. Aside from that cultural clash, I never get the sense that Picasso chooses violins or guitars for any other reason than that they offer interesting shapes with interiors asking to be exteriorized by Cubism. 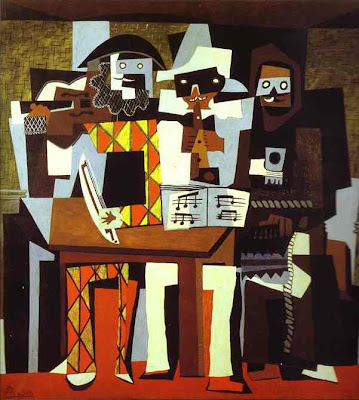 After World War I, however, Picasso returns to the human side of music in Synthetic Cubist works such as Three Musicians (above, from 1921, the PMA version). I’ve always loved Three Musicians for its color and humor, especially in contrast to the dour browns of earlier Analytical Cubism. Here, both the instruments and the anatomy of the musicians are all wrong, yet the sense of performance is completely right. Picasso’s art is so rich and so varied across so many styles that his accomplishment is simply too large to take in all at once. Slicing into that oeuvre and looking at one sliver allows you to see in microcosm the macrocosm of Picasso’s imagination continually evolving, sometimes forward and sometimes back. The sadness of the Blue Period and The Old Guitarist disappears in Three Musicians, yet the experimentation of Cubism remains. Such never ending reinvention and pilfering literally from himself sets Picasso apart from the rest of modern art—a movement unto himself only momentarily aligning with others, if at all. In the final analysis, “if music be the food of love,” and life, Picasso calls “play on.”

At first I thought the mustaches were mouths, which would suggest the musicians are smiling. It still seems like that when I look at it. I did a post on the MOMA version of this piece: http://thecosmicparadigm.blogspot.com/2011/01/review-three-musicians.html