Man on the Inside

When you blog, you think the whole world should blog. And when I say “blog,” I mean express yourself in an unfettered way that adds something to the zeitgeist rather than watch reruns on television. I recently watched an episode of Great Museums titled China: West Meets East at the Metropolitan Museum of Art during which a curator compared the writings of owners of a painted scroll to blogging. Over the centuries, the different owners of that scroll added not only their personal mark to the scroll, which attested to its authenticity while giving a built-in provenance, but also shared their thoughts on that work of art with future generations. The desire to share such thoughts stretches beyond time and place. What really struck me was the use of blogging by a curator from the Met, one of the old-school institutions that still resists a strong online presence. While other museums such as the Indianapolis Museum of Art (their logo above) show a great deal of forward thinking in filling in this niche and appealing to a younger audience, the older, larger museums still seem to feel its not something they need, at least not yet.

The blog of museum blogs, conveniently titled Museum Blogs, listed 320 museum blogs worldwide the last time I checked. Art museums featuring blogs include the Tate Modern, the San Francisco Museum of Modern Art, the Brooklyn Museum, the Walker Art Center, the Amon Carter Museum, and the Nelson-Atkins Museum of Art. The Museum Marketing Blog recently posted a persuasive argument for museums to include blogs in their overall internet marketing strategy. (You can see that full post here.) “Blogging is a way of engaging audiences with up-to-date and behind-the-scenes information from a venue. It is less formal then a traditional museum website, giving the curators and staff a chance to push the museum’s ‘personality,’” The Museum Marketing Blog explained. “The casual format means that any information can be added, from a fresh look at objects in the collection, to event reviews, to snippets and thoughts from curators; this variety will keep readers interested, and the flexibility means it should be easy to find content to keep it going.” Perhaps most importantly, a blog sets up a “dialogue” with patrons, they argue, appealing to a younger, more internet-savvy, usually professional audience. Although traditional marketing strategies will continue to be the best way of reaching a mainstream audience, a blog opens the door on a whole new, growing demographic. In that same post on the value of a museum blog, the writer stresses the need for “well written and informative” content so that people “don’t feel like they are being sold to,” even if the main goal is “selling” the museum experience itself. 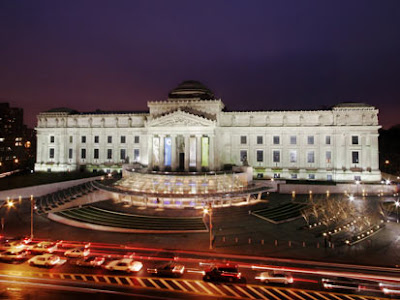 None of the major, encyclopedic survey museum in the United States—not the Met, the Philadelphia Museum of Art, the Art Institute of Chicago, or the Museum of Fine Arts in Boston—currently features an institutional blog. I suspect that once one of them breaks the ice, the others will follow, but the gap between the giants and the up and comers such as The Brooklyn Museum (above) and the Indianapolis Museum of Art, two museums that have really embraced blogging and the internet in general, is so great that the big boys don’t consider themselves rivals for the same audience. With the U.S. economy tanking right now, all venues of culture will be hurting for income and looking for new means of outreach to untapped demographics. Blogging might finally open up markets of young people looking to discover new forms of entertainment with more substance than most American culture. Traditional means of marketing just don’t reach these people, who don’t own landline phones and don’t read newspapers but do spend a lot of time in front of a computer. Such people may be just a Google search away, but if you don’t have something for Google to find, they’ll never find you. 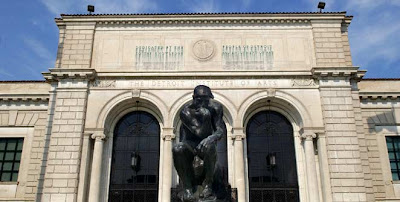 I must confess that this issue has been on my mind because I’m hoping to swing a deal with a museum to be an in-house, institutional blogger. I’m not worried about losing objectivity, because I’ve never really been that objective in my views on art. I’ve always been an unashamed promoter of museums and great books and exhibitions of art and would love to be able to do this as a full-time gig rather than just as a non-paying hobby that I love. As I’ve watched my hit count rise thanks to the body of work I’ve built up since starting, I’ve grown to believe that I’ve created something of value and want to find a bigger audience. Writing “for the man,” so to speak, may provide that larger stage and soothe my conscience in knowing that I’ve done something to keep the visual arts alive in this country. After reading recently how the Detroit Institute of Art (above) recently found themselves $17 million dollars in the hole for 2008, I thought how they might be the canary in the coal mine for other museums across America. Blogging most likely won’t solve all the financial ills of museums, but it might be the first step in fending off extinction.

I was wondering when you were going to get to paragraph #4! :)

I hope the deal is swung and we "have a man on the inside"! I'm pulling for you anyway.

I suspect the DIA's problems likely stem from other financial factors, such as a slowly shrinking benefactor roll, a local populace no longer willing or able to contribute, and a host of other aspects. A blog may bring them more exposure, but I doubt the return on investment would be sufficient to justify it. After all the intent would be to attract more benefactors and members, not just educate. Few people view Detroit as a tourist destination.
Still, your idea is fascinating and has merit. A blog describing or presenting an art work a day would be an interesting project, especially if it highlighted some of the obscure or uncommon pieces. I for one would like to get into the archives of the Met just to see what they aren't showing us. That would be the greatest advantage of blog.
That said, there is a strong current against the internet - or more correctly the digital format - as a medium for intellectual discourse. Nicholas Carr, James Bowman and Mark Bauerlein have all written harsh critiques outlining the cognitive defects present in the digital format. While I disagree with these scholars, I must admit the empirical evidence for their case is strong. Nevertheless, IMO, the solution is not abandoning or shunning the digital media, but rather adapting and developing a better mode for presenting the data. Consider this point: the ubiquitous comment box for blogs is invariably tiny and difficult to use when composing long messages (such as this one). Unless readers are innovative and use the notepad or TextEdit to write their prose, comments tend to be short - even terse. The impermanence of the digital format is another problem.
I'm not saying these obstacles cannot be overcome. I am saying that prose alone will not suffice. A new paradigm needs to be developed for a blog to be effective. Case in point - ScienceBlogs. They have a huge volume of traffic and cover a diverse and complicated subject matter. Nonetheless, the posts and blogs that generate the largest following are, for lack of a better word, reactionary. Furthermore, many of the posters are "regulars," which to some marketing people are both a boon and bane. (They tend towards the free-ride sector of consumers and become abusive to those they consider intruders.) Any museum curator or director worth their salt is going to need to see how you intend to overcome the cognitive obstacles the internet/digital format presents and how you will deal with the spam and abuse that will inevitably occur. Otherwise you are asking them to spend money on a vanity project that may or may not succeed.

The Olympics showcase the greatest athletes and most fascinating cultures in the world. As the 2008 Games get underway in Beijing this month, be sure to show your Olympic spirit right at home with a visit to the Met, which boasts the largest collection of Asian Art in the West.
------------------
williamgeorge
Search Engine Optimization