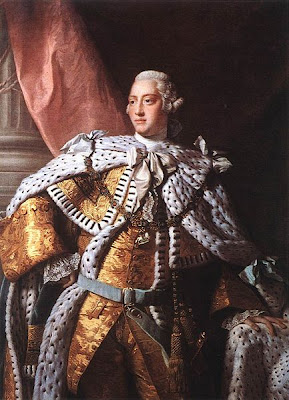 After taking the Grand Tour, and painting the portraits of others on that nineteenth century rite of cultural passage, Allan Ramsay found himself named “Painter in Ordinary” to England’s King George III, besting the greatest portraitists in England for the post. Born October 17, 1713, Ramsay painted the king in full regalia in his Portrait of George III (above, from 1762). Since the days of Elizabeth I, royal portraiture carried a giant load of metaphorical weight. Ramsay’s relaxed, warm style suited the new “look” that the king wanted for himself and the royal family—still seated firmly in the position of power but also conscious of the oncoming Age of Enlightenment and its challenges to entrenched, enthroned authority. Whereas Elizabeth I requested portraits posing her literally astride the globe like a colossus with all traces of humanity covered up by voluminous gowns, George III wanted viewers to see him as a man first and foremost, albeit a man with considerable power. Ramsay, the “Painter in Ordinary,” made the ordinary look extraordinary with his own extraordinary skills. 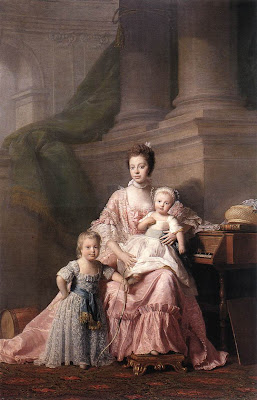 Sir Joshua Reynolds, Thomas Gainsborough, and Sir Thomas Lawrence would follow Ramsay’s lead as they founded the golden age of British portraiture in the generation just after Ramsay’s peak years. That trio followed Ramsay not only in portraying the trappings of power, but also in painting more tender, “behind the throne” scenes such as Ramsay’s Queen Charlotte with her Two Children (above, from 1765). Queen Charlotte widely patronized the arts and clearly recognized the more subtle skills of Ramsay. Instead of asking for the royal treatment, Queen Charlotte chose to have her and her two children painted more naturally, as if they were simply a well-off mother with her beloved children and not the queen and the heirs to the throne. Ramsay’s skill in painting the children with the same tenderness shown to them by their mother matches the attentiveness he gives to the beautiful fabrics they wear. 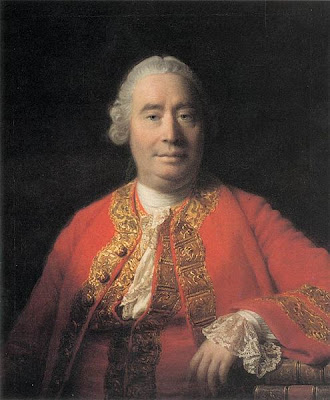 Ramsay’s talents extended beyond just the visual arts. Like his father, also Allan Ramsay, Ramsay wrote poetry and dabbled in other forms of writing, cultivating the rich, cultured existence of a gentleman of the time. Ramsay certainly knew the works of David Hume when he painted his portrait (above) in 1766. Hume’s naturalistic philosophy based on the idea that reality is only what we perceive empirically and not something we can reason out, succinctly described in An Enquiry Concerning Human Understanding (bane of freshman Philosophy students everywhere, myself included), fits in well with Ramsay’s style of painting. Rather than construct a grand narrative and alter the facts to fit that narrative, Ramsay instead painted exactly what was before him—the grand and the small, the superhuman and the humanly fragile. The gentle treatment of Hume in his portrait may attest to Ramsay’s finding of a kindred spirit in the philosopher. Sadly, Ramsay fell from a ladder in 1770 and injured his painting arm beyond repair. After finishing one last royal portrait despite excruciating pain, Ramsay left his post and an assistant completed the unfinished works. Ramsay spent his final years in Italy, writing and reading yet always pining for the days when he could paint the ordinary in his extraordinary fashion.