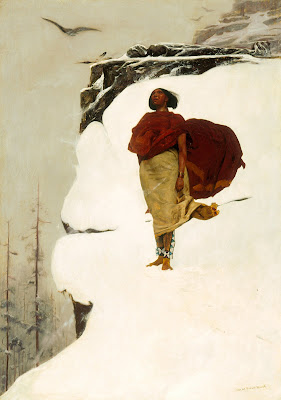 Traveling through western railroad towns in the early 1880s, the painter George de Forest Brush saw poor Native Americans struggling to survive. The sight of these “wretched creatures,” Brush later wrote, made him feel “deceived” by the Wild West tales of his youth. George de Forest Brush: The Indian Paintings, an exhibition currently at the National Gallery of Art, examines the complex motivations behind Brush’s adoption of Native Americans as his primary subject. In the catalogue to the exhibition, Nancy K. Anderson gathers together a series of essays that place Brush not only in the context of late nineteenth century America but also in the context of the academic tradition. Brush sought to find a place for Native Americans in both art history and human history. “In choosing Indians as subjects for art, I do not paint from the historian’s or the antiquary’s point of view,” Brush said. “I am interested in those habits and deeds in which we have feelings in common… If I were required to resort to [historical facts] to bring out the poetry, I would drop the subject at once.” For Brush, Anderson writes, “Young Indian men, living independently on their ancestral land, were the equal of the ancient Greeks in physical beauty and thus entirely suitable as subjects for art.” A figure such as the Native American mother in Mourning Her Brave (above) says nothing about native dress or traditions but speaks volumes of the shared, universal emotions Brush saw as the truest, most human link between cultures. 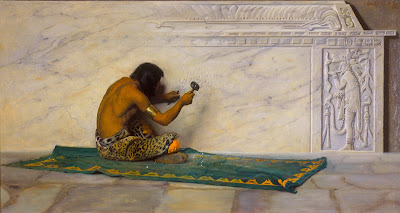 The Brush renaissance reflected in this exhibition arrives thanks to the reemergence of several paintings lost to public view for almost a century. An Aztec Sculptor (above) disappeared after 1899 until a 2004 sale and subsequent donation to the NGA. Other Indian paintings by Brush have enjoyed similar resurrections, providing scholars with additional insight into this little known artist. Perhaps the most fascinating revelation of Brush’s brush with Indian culture is that he shared little of the political fervor for easing the Native Americans’ condition that peaked with the 1881 publication of Helen Hunt Jackson’s A Century of Dishonor, a brutal reckoning of the United States’ Government’s history of cruelty against Native Americans. However, “[d]espite heated public debate and constant media attention,” Anderson writes, “no hint of racial conflict—an undeniable fact of the day—appeared in any of Brush’s Indian paintings.” Brush denies this “undeniable fact” by lifting himself above the political fray, using the Indian and Indian culture as a metaphor for the personal and cultural issues Brush could not address directly in his work. Brush’s flirtation with painting the story of Ossian, the mythical Irish primitive, proves that it was their primitivism rather than anything specific about Native Americans that drew him to them as a subject. Brush later became active in reform politics, specifically child labor laws, but even that action originated in his general fear of industrialization’s effect on humanity rather than in a particular political viewpoint. 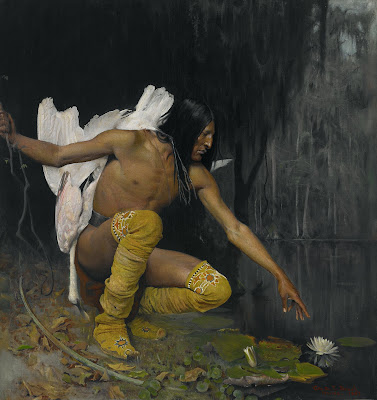 From 1873 through 1879, Brush studied art in Europe, most notably with Jean-Leon Gerome, renowned artist and teacher of other American artists such as Thomas Eakins. Returning to America, Brush wanted to use his European training yet give his work a distinctly American flavor that would make it palatable for American collectors. Nothing seemed more American at the time than the Wild West and Native Americans. Traveling through Wyoming and Montana, Brush lived with and studied the Arapahoe, Shoshone, and Crow tribes, actually painting them within the teepee studio he build himself. Collecting just enough facts to make his works recognizably “Indian,” Brush soon returned East and painted from props in the studio. Anderson calls Brush’s Indian paintings “layered fiction” in that beneath “an entirely convincing illusion of reality,” Brush painted “layer upon layer of personal and aesthetic disquiet.” When Brush painted the simple existence of Indians, he really painted his distrust of the growing complexity of American society as it modernized and mechanized on the eve of the twentieth century. When Brush painted figures such as The Indian and the Lily, he painted a Native American version of the classical Narcissus, both drawing a parallel between the old world and the new and arguing for American roots equal to the Greek and Roman roots of European society. “The Indian world [Brush] created in his paintings (for it did not exist anywhere else),” Anderson concludes, “may thus be seen as a very personal form of protest.” 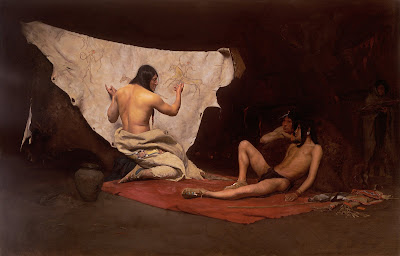 Brush alluded to many classic works of Western art in his Indian paintings. In The Picture Writer’s Story (above), the storyteller mimics the pose of Michelangelo’s Libyan Sibyl on the ceiling of the Sistine Chapel. Laying Away a Brave follows the composition of Rubens’ Descent from the Cross, recasting Christ as a fallen warrior. Brush’s even alludes to his contemporary Winslow Homer in Before the Battle, which honors Homer’s Prisoners from the Front. All of these allusions add up to Brush’s obsession with story telling and the tradition of passing down culture from generation to generation, as the picture writer does above to the young braves nearby. The artist thus becomes just another transmitter of culture like any artisan. Mary Lublin, in “Living for Art: Brush and His Indians,” sees Brush’s Indian paintings as “a sustained artistic meditation on human creativity” in which “a dynamic interaction with nature is presented as both the foundation of art and a source of cultural growth.” The Native American’s ties to the earth serve as the template for all art and all cultural advancement. “Brush’s impassioned, enduring, and all-encompassing antimodernism” accompanied “a commitment to academic principles and pre-industrial ideals that informed his life as well as his art,” Emily D. Shapiro writes in her essay, “’A Purpose in Every Stroke’: Brush’s Images of Indian Artistry.” Following in Gerome’s footsteps, Brush became a teacher himself and gained the love and respect of generations of students. While the Arts and Crafts Movement flourished in England, Brush tended his own American garden in which nature and creativity provided an oasis from invading industrialization. 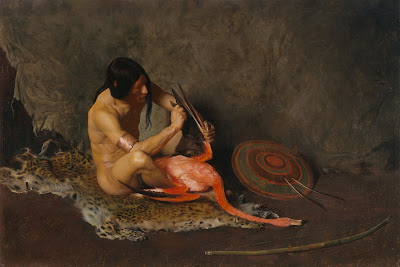 George de Forest Brush: The Indian Paintings walks a fine line between presenting the artist as a respectfully creative user of Native American traditions and a exploiter of those traditions. “You must not confuse me with a would-be historian of the people,” Brush wrote in a letter. “I live for art and not for Indians.” Diane Dillon’s essay on “Indianicity” in the context of the 1893 World’s Fair demonstrates how the idea of the Indian became a commodity that “[l]ike money,… served as a medium of exchange, lubricating concrete and conceptual transactions.” Brush’s painted transactions with his audience buy into as well as sell the commodity of “Indianicity” in universalizing that culture and, thus, losing the particularity and individual humanity of Native Americans as people. After 1891, Brush moved away from painting Indians and turned his attention to portraits modeled on the works of the Italian Renaissance, even moving to Italy with his family. Brush continued to practice the Native American crafts he had learned—cutting moccasins, making a bow and arrow, carving a canoe, making a headdress (as in the painting above)—and even posed in Native American dress for photographs until his death in 1941. Whether Brush’s Indian paintings did anything to help those “wretched creatures” he saw from a passing train years before seems to be a question he never concerned himself about. George de Forest Brush: The Indian Paintings opens a door on the work of an unjustly forgotten artist as well as on a conflicted era in American history when the continent’s first peoples were slowly becoming more an idea than a reality.

[Many thanks to the National Gallery of Art for providing me with a review copy of George de Forest Brush: The Indian Paintings and for the images above from the exhibition.]
Posted by Bob at 12:01 AM

Wow! I've never seen these before. How beautiful!!!!!

My brother found Custom Writing Service DigitalEssay.net  and ordered a couple of works. Their customer service is outstanding, never left a query unanswered.