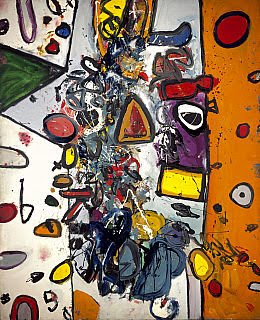 I used to visit all the very gay places
Those come what may places
Where one relaxes on the axis of the wheel of life
To get the feel of life...
From jazz and cocktails.

Life is lonely again,
And only last year everything seemed so sure.
Now life is awful again,
A troughful of hearts could only be a bore.
A week in paris will ease the bite of it,
All I care is to smile in spite of it.
Ill forget you, I will
While yet you are still burning inside my brain.
Romance is mush,
Stifling those who strive.
Ill live a lush life in some small dive...
And there Ill be, while I rot
With the rest of those whose lives are lonely, too..

—From “Lush Life” by Billy Strayhorn

Few artists joined the worlds of music and art as seamlessly as Alan Davie, improvisational jazz saxophonist and painter. Born September 28, 1920, Davie consciously tried to bring the latest innovations in jazz music into his paintings, such as Lush Life No. 1 (above, from 1961), which takes its title from the jazz standard of the same name written by Billy Strayhorn. The shapes bear a resemblance to the organic forms found in the work of Joan Miro, but the brilliant colors of Davies paintings shout out in a way that Miro’s usually don’t. Davie fell in love with the idea of Zen and total freedom from conscious control and tried to bring it not only to his music but also to his art. While jazz giants such as Ornette Coleman were redefining that genre of music through his free jazz movement, actually titling his 1959 album The Shape of Jazz to Come, Davie looked to music to give shape to his visual style. Davie walks the fine line of freedom, just as Coleman did, giving the work just enough shape to avoid chaos—the “secret” of all great abstract art. 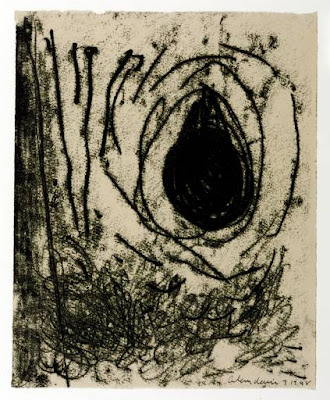 When Davie looked for artistic examples of what he wanted to get at in his art-music fusion, he looked to the Surrealists. Just like a “wrong” note sometimes can sound right, Davie intentionally invited the accident when making prints such as the interestingly titled Interested Sperm Around an Egg (above, from 1948). Sandwiching ink between the paper and a pane of glass, Davie then scratched at the other side of the paper with his fingers, unaware of what shapes had appeared until he flipped it over. Like someone taking a Rorschach inkblot test, Davie then titled the result after the first thing that popped into his mind. Davie’s interest in psychology, especially the mythos-driven work of Carl Jung, informs much of his work. There’s something very Zen in these black and white prints, yet Davie never strains to imitate Asian examples. In that sense, he truly lives the Zen principle of letting go and letting it flow. 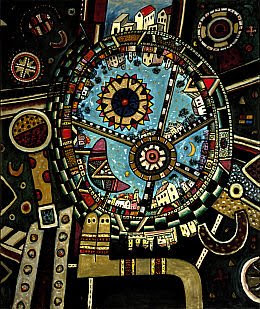 Davie continues to work today at the age of 88. Recent works such as The Magician's Mirror No. 3 [Opus 1450] (above, from 2000) show him still incorporating diverse sources, like any good jazz musician. In Davie’s magic mirror we see reflected Native American pottery, star charts, mandalas, and countless other far-flung inspirations. As time passed, Davie gave up on the pure abstract of his freer period and began to incorporate recognizable elements such as the house at the top of The Magician’s Mirror No. 3. That house seems almost reminiscent of Marc Chagall’s penchant for inserting a small house or animal in an otherwise otherworldly work as part of his personal symbolism. Davie continues to amass a personal universe of symbolism, adding more and more notes to the music in his head.