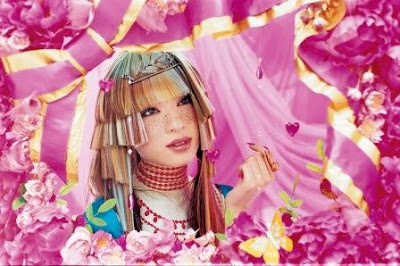 When Japanese photographer Daido Moriyama, who works primarily in black and white, encountered a photograph by Mika Ninagawa of Technicolor flowers in close-up during a tour of a museum, he called it “an indubitable work of visual scandal—an assault—that drew a clandestine smile upon my face.” Like looking too long at the sun, peering too long at the images of Ninagawa can blind you, but with pure color rather than pure light. In a new monograph from Rizzoli of Ninagawa’s work, titled simply Mika Ninagawa, you find yourself first assaulted then smiling like Moriyama—plunged into a fantasy land resembling ours but amplified by color and imagination. Ninagawa reigns both as princess and queen in this fantasy land—a fairy princess granting our every wish for beauty in the world, while simultaneously a queen of the damned who understand the fragility of that beauty and cherish every fleeting moment. Please come over to Picture This at Big Think to read more of "Fairy Princess."

[Many thanks to Rizzoli for providing me with the image above and a review copy of Mika Ninagawa.]
Posted by Bob at 10:39 AM