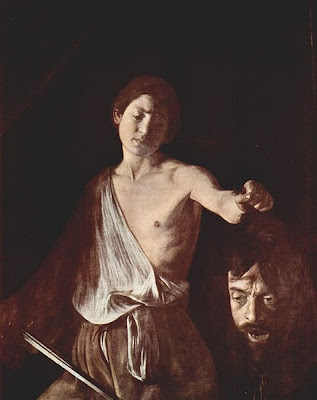 Who killed Caravaggio? Or what killed Caravaggio? Four hundred years later, who cares? To “celebrate” the 400th anniversary of the demise of the demented genius of the Renaissance, Italy’s National Committee for Cultural Heritage looks to answer these questions once and for all. According to a report from Reuters, a team from the departments of Anthropology and Cultural Heritage Conservation at the universities of Ravenna and Bologna will play a different kind of tomb raiders in search of Caravaggio’s remains. The process, however, which sounds more convoluted than an episode of CSI, would challenge even Gus Grissom’s team. Please come over to Picture This at Big Think to read more of "CSI: Renaissance Italy."
Posted by Bob at 7:21 AM

Enjoying your blog very much indeed. I notice you haven't written anything about Johan (nes) Zoffany. Do you know of an authoritative source?

Great post! I'm excited to hear about the results of this...

I like to pretend that Caravaggio was shot by a cardsharp in a saloon in the wild west.

Two superb iPhone and iPad applications are on this Caravaggio exhibit are available for download from the App store. They are called Caravaggiomania and are quite impressive for their high level of video content and extraordinary high quality image of the art works!! Furthermore within the application there is a map of Rome indicating where additional works by Caravaggio, not included in the Scuderie del quirinale exhibit because they were not to be moved. These additional works, as those in the exhibit, are commented upon, zoomable and viewable in great detail. These applications are a stunning display of beautiful art and a fun way to relive the exhibit or, if one has not gone, a great way to get a true taste of it... The links to the apps are:
For iPhone:http://itunes.apple.com/us/app/caravaggiomania/id372620380?mt=8
and for iPad: http://itunes.apple.com/us/app/caravaggiomania-hd/id375357998?mt=8

Hope you enjoy the great art!!