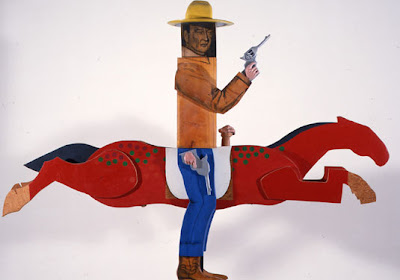 When you think of Pop Art, the art movement that dominated the late 1950s and early 1960s in America, you almost automatically cast up the wigged head of Andy Warhol. A few other names might rise up from memory— Roy Lichtenstein, James Rosenquist, or even the British artist Peter Blake—but even those names have in common one thing—they’re all men. Seductive Subversion: Women Pop Artists 1958-1968 at the University of the Arts in Philadelphia wants you to learn the names of the “pop divas,” the women who worked in the same culture-driven, irony-laced language as Warhol and others but were never heard, until now. Please venture over to Picture This at Big Think to read more of "Pop Divas."

[Many thanks to the University of the Arts in Philadelphia for providing me with the image above from Seductive Subversion: Women Pop Artists 1958-1968, which runs from January 22 through March 15, 2010.]
Posted by Bob at 5:35 AM

You're right about who I think about when I think Pop Art. Not a single woman comes to mind. Would love to be able to visit that exhibit. Thanks for helping me discover it!