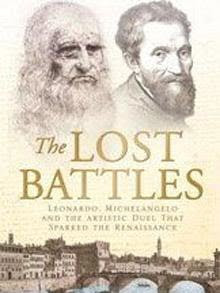 In 1504 no less a historic name than Niccolo Machiavelli, author of The Prince, brought together the two greatest artists of the time to decorate the walls of the Great Council Hall of Florence's Palazzo Vecchio. The aging Leonardo da Vinci and the up and coming star Michelangelo found themselves pitted against one another in a competition to decide whose work and whose style would reign supreme. Jonathan Jones’ The Lost Battles: Leonardo, Michelangelo and the Artistic Duel that Defined the Renaissance tells the story of this battle royal between the Renaissance heavyweights that somehow resulted in a befuddling draw thanks to the political intrigue of the times. With great detail and captivating insight, Jones puts us there between the battlers, always wondering who will come out on top. Please come over to Picture This at Big Think to read more of "Battle Royal."


[Many thanks to Simon and Schuster UK for providing me with a review copy of Jonathan Jones’ The Lost Battles: Leonardo, Michelangelo and the Artistic Duel that Defined the Renaissance.]
Posted by Bob at 9:21 PM

Maurizio Seracini seems to believe that Anghiari is still intact in some form, I hope he is correct.

From Cellini's description, Michelangelo's piece seems to be the most enigmatic, the young sculptor describing the cartoon as something which Michelangelo never surpassed.