How the Vorticists Defied the World (and Definition) 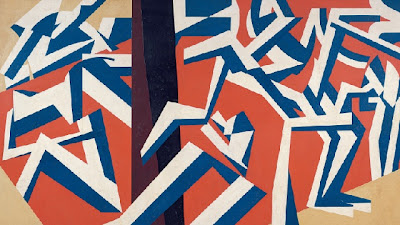 If the Vorticism movement had a headstone, it would confidently read “Here Lies Vorticism, 1914-1919.” Perhaps no other art movement had such a cut and dried beginning and end, yet no other art movement has been so poorly defined, even today. Great, yet slightly mad, minds such as Wyndham Lewis and Ezra Pound tried their best, but strayed more into mysticism than method when attempting to put Vorticist imagery into words. The Vorticists: Manifesto for a Modern World, at the Tate Britain through September 4, 2011, attempts to make sense of the Vorticists as well as reposition them in the greater scheme of modern art. The Vorticists were rebels with a nebulous cause, but the passion of their rebellion and the art it produced still draw us into their vortex. Please come over to Picture This at Big Think to read more of "How the Vorticists Defied the World (and Definition)."

[Many thanks to the Tate Britain for providing me with the image above and other press materials from The Vorticists: Manifesto for a Modern World, which runs through September 4, 2011.]
Posted by Bob at 7:44 PM

Wow, this is the best site I’ve ever read. Thank you for sharing this.MBA College near the chandigarh

I am amazed to see such an amazing post. Keep up the good work.best mba college in punjab