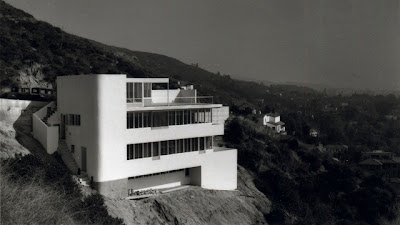 From neon-lit “La-La Land” to dark, gritty L.A. Confidential and L.A. Noire, the city of angels—Los Angeles—has occupied a place in the public’s imagination in many forms. In Julius Shulman Los Angeles: The Birth of a Modern Metropolis by Sam Lubell and Douglas Woods, we see through the eyes of a true lover of the city. “My father Julius Shulman grew up with Los Angeles,” Judy McKee, Shulman’s daughter, suggests in her tender foreword. In a stunning array of black and white as well as color photographs, Julius Shulman Los Angeles tells a love story between a talented photographer and his home city, the “girl next door” that became the love of his life and to whom he devoted his talents. Please come over to Picture This at Big Think to read more of "Julius Shulman’s Los Angeles Love Story."

[Many thanks to Rizzoli for providing me with the image above from and a review copy of Julius Shulman Los Angeles: The Birth of a Modern Metropolis by Sam Lubell and Douglas Woods.]
Posted by Bob at 7:56 PM