Why David Hockney Went Back to Nature 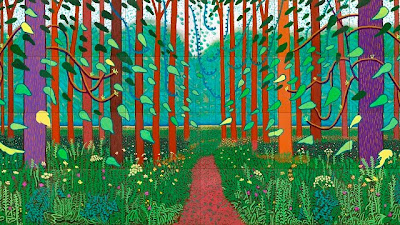 “If you want to replenish your visual thinking, you have to go back to nature,” David Hockney says in Bruno Wollheim’s film David Hockney: A Bigger Picture, “because there’s the infinite there, meaning you can’t think it up.” That film captures Hockney painting many of the amazing landscapes that appear in the exhibition David Hockney RA: A Bigger Picture, which appears at the Royal Academy in London through April 9, 2012. Striking a blow for painting in what he calls the “post-photographic age,” Hockney goes back to nature to revitalize his own art and, he hopes, save painting itself from Damien Hirst’s dots and other crimes against civilization. Please come over to Picture This at Big Think to read more of "Why David Hockney Went Back to Nature."