Can We Finally Take Keith Haring Out of His Time Capsule? 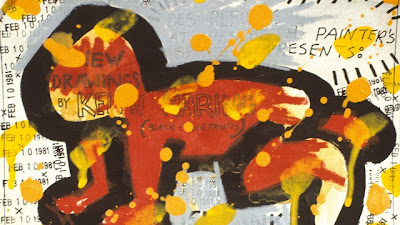 At the Brooklyn Museum’s current retrospective of Keith Haring’s early work, titled Keith Haring: 1978–1982, you can view what may be the earliest video of the artist at work. In Haring Paints Himself into a Corner, Haring literally paints himself into a corner as music by the cult band Devo blares in the background. Friend and fellow artist Kenny Scharf remembers seeing the film being made and Haring painting lines “to the beat of the music, almost like a dance.” It sounds almost like an artsy version of That ‘70s Show, complete with period soundtrack. But, as Jade Dellinger has remarked, Devo’s first album, Q: Are We Not Men? A: We Are Devo!, “became a rallying call and a conduit for the like-minded to meet” in that year of 1978. Haring is so much a part of his time and, because of his advocacy and death, the frightened, confused, early AIDS era, the temptation to take him out of the time capsule and gently return him is often irresistible. By looking at the early Haring, however, Keith Haring: 1978–1982 shows how the artist and his spirit live on today. Please come over to Picture This at Big Think to read more of "Can We Finally Take Keith Haring Out of His Time Capsule?"

[Many thanks to the Brooklyn Museum for the image above and for other press materials related to the exhibition Keith Haring: 1978–1982, which runs through July 8, 2012.]
Posted by Bob at 7:12 PM

Awesome quotes of Keith Haring . Thanks for sharing this with us.