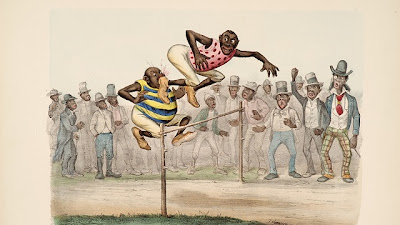 Nothing haunts like a skeleton in the closet. When art museums and cultural institutions talk about their treasures, there are always a few items they’d rather keep out of the conversation. In Controversy 2: Pieces We Don’t Talk About, which runs through December 30, 2012 at the Ohio History Center in Columbus, Ohio, the Ohio Historical Society once again takes a few skeletons out of their closet. Focusing on five items from their archives that touch on stereotypes, the organizers don’t just dare to touch the third rail but dance along its length while inviting viewers to dance with them. By opening up the conversation about what we don’t talk about when we talk about art, Controversy 2 takes us to the dark side and sheds light not only on the pieces themselves but also on how to talk about them. Please come over to Picture This at Big Think to read more of "What We Don’t Talk About When We Talk About Art."

[Many thanks to the Ohio Historical Society and Sharon Dean, director of Museum and Library Services, for providing me with the image above and other materials related to Controversy 2: Pieces We Don’t Talk About, which runs through December 30, 2012 at the Ohio History Center in Columbus, Ohio.]
Posted by Bob at 8:38 AM

Hey Bob, I just shared a comment about your post on my brazilian blog that talks about anthropology and urban art, there is also a hyperlink to your blog. http://antropofilme.blogspot.com
I hope you like it. Thanks