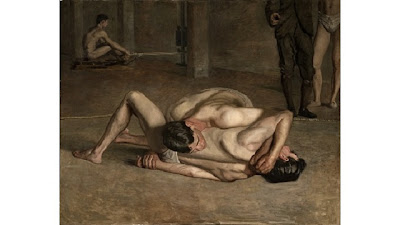 Manly Pursuits: The Sporting Images of Thomas EakinsWhile Thomas Eakins’ masterpiece The Gross Clinic undergoes a facelift on the east coast in the Philadelphia Museum of Art’s An Eakins Masterpiece Restored: Seeing The Gross Clinic Anew (my review here), Eakins’ art is being seen on the left coast in a whole new light as well. Manly Pursuits: The Sporting Images of Thomas Eakins at the Los Angeles County Museum of Art brings together 60 different works by Eakins related to sports—the first time that any museum has examined Eakins’ sports illustrations as the main focus of an exhibition. These sports illustrated illuminate not only Eakins’ approach to the subject, but also how sports began to take hold of the American public’s imagination in the late nineteenth century. It’s a glimpse at the very beginning of the fandom that would one day spawn ESPN and tailgating. Please come over to Picture This at Big Think to read more of "Sports Illustrated."


[Many thanks to the Los Angeles County Museum of Art for providing me with the image above and press materials for Manly Pursuits: The Sporting Images of Thomas Eakins, which runs through October 17, 2010.]