Gabriel Metsu: Close, But No Vermeer 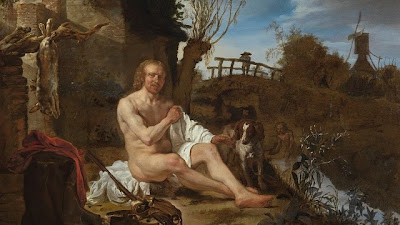 “Why buy a Vermeer when a Metsu is available?” Adriaan E. Waiboer, curator of northern European art at the National Gallery of Ireland, repeats that odd sounding question in the catalog to Gabriel Metsu, 1629-1667, which runs at the National Gallery of Art in Washington, DC, through July 24, 2011. That question didn’t sound so odd in the early 19th century, when Metsu’s reputation stayed strong while Vermeer remained a little-known quantity. In this exhibition of Metsu’s art, the first worldwide since 1966 and the first ever in the United States, Americans get a glimpse of a contemporary and rival of Vermeer, who seems so unique in the public’s imagination. Perhaps you’ll come away, as I did, thinking along the lines of the old carnival barker’s line, “Close, but no cigar.” Yes, Gabriel Metsu’s “Close, but no Vermeer,” but that’s not necessarily a bad thing. Please come over to Picture This at Big Think to read more of "Gabriel Metsu: Close, But No Vermeer."

[Many thanks to the National Gallery of Art in Washington, DC, for providing me with the image above from, press materials for, and the catalog to Gabriel Metsu, 1629-1667, which runs through July 24, 2011.]
Posted by Bob at 6:04 PM