Can Grayson Perry Put the “Art” Back in “Artisan”? 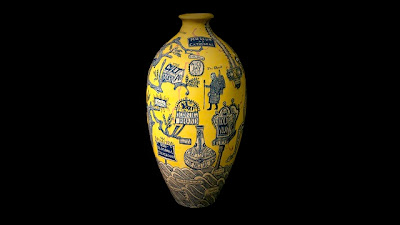 Wander through most major museums and you’ll find a remarkable number of works with no name. Either lost to the mists of time or never recorded because the work was considered that of an artisan rather than that of an artist, the names of those who created these remarkable works long to be remembered. At the British Museum, home to over 8 million nameless wonders from cultures spanning both the globe and the ages, those nameless artists are finally getting their due. In Grayson Perry: The Tomb of the Unknown Craftsman, Grayson Perry, winner of the 2003 Turner Prize, curates a show matching these unknown craftsmen (and women) with his name-brand star power to raise the public consciousness of the talents of these neglected artists. If Perry succeeds, he may finally put the “art” back in the name “artisan. Please come over to Picture This at Big Think to read more of "Can Grayson Perry Put the “Art” Back in “Artisan”?"

[Many thanks to the British Museum for providing me with the image above and a copy of the catalog to Grayson Perry: The Tomb of the Unknown Craftsman, which runs through February 19, 2012.]

[Many thanks to friend Hugh for prompting me to look at Perry’s work.]
Posted by Bob at 3:21 AM