How to Picture Your Inner Acrobat 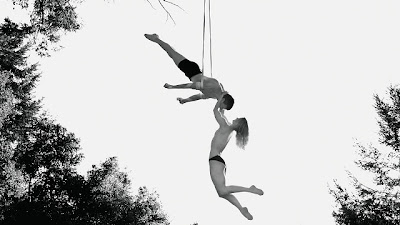 Hemmingway wrote of courage as grace under pressure. In Private Acts: The Acrobat Sublime, Harriet Heyman writes of grace under the pressure of gravity and the courage demonstrated by those who commit themselves to that art. Accompanying the amazingly lyrical photography of Acey Harper, Heyman’s writing strikes to the soul of the acrobat, while allowing us to discover the acrobat (or at least the sublime spark of that art) within. “They are ambiguous,” Heyman explains, “both like us and unlike us. As magnificent as superheroes, acrobats are objects of desire. We want to be them, as free as they appear to be—a thought that is at once tempting and terrifying… We are thrilled to be going along for the ride—from a safe distance.” Reading Private Acts allows us to watch from a safe distance while still feeling that we’re up there on the trapeze, too, sharing in the daring intimacy of self-propelled flight. Please come over to Picture This at Big Think to read more of "How to Picture Your Inner Acrobat."

[Many thanks to Rizzoli for providing me with the image above and a review copy of Private Acts: The Acrobat Sublime, with text by Harriet Heyman and photographs by Acey Harper.]
Posted by Bob at 8:36 PM