How One Artist Pictured the Japanese Internment Camps—From the Inside 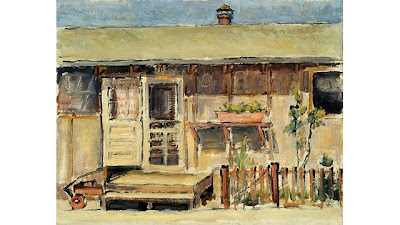 Last month saw the 70th anniversary of the attack on Pearl Harbor that drew the United States into World War II. Sadly, that day of infamy led to a different kind of infamy for America in the form of the Japanese Internment Camps initiated by President Franklin D. Roosevelt’s signature on Executive Order 9066 on February 19, 1942. Among the approximately 110,000 Japanese-Americans relocated and interned, Seattle area artist Kamekichi Tokita and his family found themselves moved from their home to a camp in Idaho. Signs of Home: The Paintings and Wartime Diary of Kamekichi Tokita by Barbara Johns tells the story of Tokita’s art and the diary he began on December 7th, 1941 to record for posterity the story of his experiences as a Japanese-American. To see history unfold through Tokita’s words and images is to gain a whole new perspective on that conflict and the nature of all immigrants to America who suddenly find themselves identified as the enemy. Please come over to Picture This at Big Think to read more of "How One Artist Pictured the Japanese Internment Camps—From the Inside."

[Many thanks to the University of Washington Press for providing me with the image above and a review copy of Signs of Home: The Paintings and Wartime Diary of Kamekichi Tokita by Barbara Johns.]
Posted by Bob at 8:13 PM

Gordon Hirabayashi died this month at age 93. Hirabayashi, a native born US Citizen, refused internment 70 years ago and was convicted of violating curfew and refusing internment. His case went to the Supreme Court, Habayashi vs the United States America and his convictions upheld.

In 1986 and 1987 his convictions were overturned by a Federal District Court and confirmed by the Federal Appeals Court.

I just wanna thank you for sharing your information and your site or blog this is simple but nice article I've ever seen i like it i learn something today.