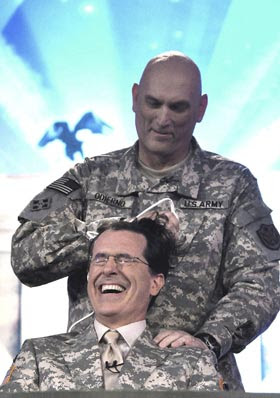 When Stephen Colbert took his show The Colbert Report to Iraq as part of the USO, he followed in the great tradition of entertainers bringing joy to the troops. Colbert, however, did more than just entertain the troops. He enlightened our country. When Colbert allowed General Raymond Odierno, commander of the Multinational Corps in Iraq, to give him the full military buzzcut on the show, a comedian demonstrated greater solidarity with the troops and patriotism than any politician of the last 6 years and counting. On this Fourth of July, I’m not thinking of George Washington, Thomas Jefferson, or even Betsy Ross. Instead, I’m thinking of the picture of a true patriot, whose tonsorial sacrifice showed just how pitiful our sacrifices at home are in comparison to those fighting abroad. Like Jasper Johns’ Three Flags (below, from 1958), America the idea and ideal is a concept with many layers and dimensions to argue over, but one that we must always remember to live in our hearts. 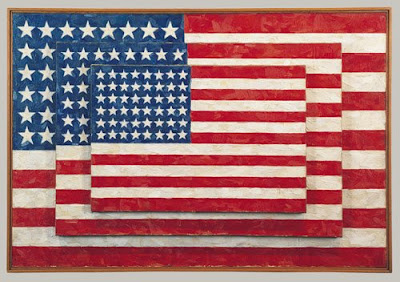