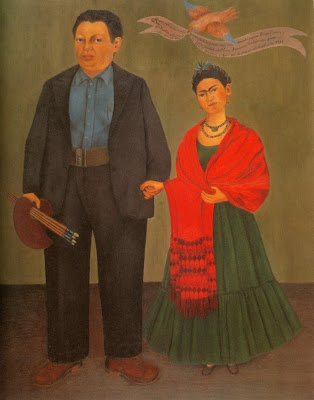 I wonder how much Woody Allen knows about Frida Kahlo, especially after seeing Allen’s 2008 romantic comedy Vicky Cristina Barcelona. Javier Bardem as the Spanish painter and Penélope Cruz as his passionate, often violent, ex-wife who also paints and actually greatly influences her ex-husband’s artistic vision, which he grudgingly admits, could be modern-day stand-ins for Frida and her ex, Diego Rivera. Born July 6, 1907, Kahlo said that she experienced two great accidents in her life: the 1929 bus accident that almost killed her and left her in agony for the rest of her life and the day she met Diego, who would break her heart countless times with philandering and other cruelties. Kahlo painted Frida and Diego (above) in 1931, when she still was “Mrs. Rivera” and devoted herself to Rivera’s career at the expense of her own. The scale of the two figures shows just how Kahlo saw herself as a tiny satellite orbiting the giant world of Diego Rivera. Kahlo’s feet seem to rise from the earth, as if Diego’s personal gravity could pull her into his orbit. In Vicky Cristina Barcelona, Bardem and Cruz’s characters strike a different pose, with the two standing as equals and, perhaps, with Cruz/Frida as the main figure at times. It’s as if Allen wants to rewrite the Frida/Diego story as it should have been told. 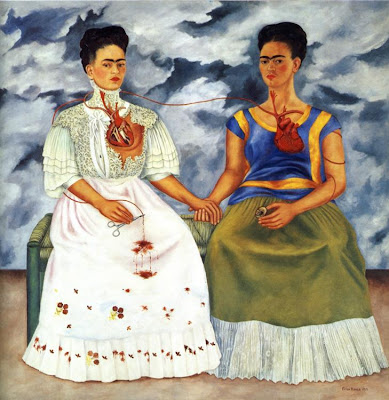 My favorite painting by Kahlo is her The Two Fridas (above, from 1939). I believe it’s the most accurate depiction of how we psychically fracture ourselves at moments of emotional stress. When Diego’s infidelities split them apart first emotionally and then legally in divorce, Frida’s life was torn in two. The strange cardiovascular system Frida creates to link the two Fridas in the painting shows how she wants to keep herself together but can’t ignore the reality of how her heart has been violated. I remember seeing this painting at the PMA during the Frida show last year and being stunned by the pain radiating from it. That tour was the first time The Two Fridas had ever been shown outside of Mexico, which made it even more memorable for me. In Vicky Cristina Barcelona, Allen tries to reconnect Bardem and Cruz’s characters through the Cristina character, as if all Diego and Frida needed was a ready and willing Scarlett Johansson to provide the missing ingredient to spice up their life. Frida certainly turned to relationships with women in her life to find something missing in her relationship with Diego, but I doubt that a threesome would have answered the deeper, lingering questions between them. 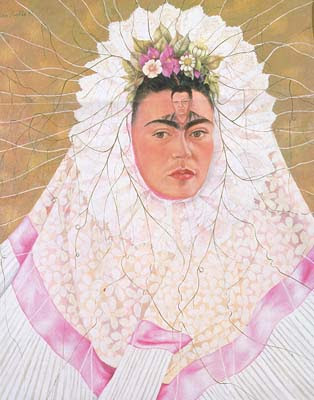 Frida showed just how much Diego lingered in and weighed upon her mind in Diego on my Mind (above, from 1943). Kahlo, who made such great use of her body in numerous other self-portraits, hides her physicality completely in this painting. All you see is an oval of her face, with a tiny portrait of Diego set in the center of her forehead, like a third eye. For Frida, Diego was the third eye through which she viewed the world. In 1949’s Diego and I, Frida paints a tearful self-portrait with another Diego on her brow, but this time the “third eye” has a third eye of its own. Frida gave Diego a third eye to symbolize his “wisdom,” as she saw it, but couldn’t paint herself with the same wisdom, instead making Diego her “third eye” and the source of all her wisdom. In Vicky Cristina Barcelona, Bardem’s Diego-esque painter eventually acknowledges Cruz/Kahlo as the source of his vision or wisdom, turning the Diego/Frida soap opera on its head. Of course, Diego acknowledged Frida’s influence stridently after her death, but in life he always maintained the upper hand, at least in the mind of the public. I’d love to ask Woody if he had Frida and Diego in mind when he wrote Vicky Cristina Barcelona, but even given the chance, I’m not sure if Woody would admit to rewriting art history in that way.
Posted by Bob at 12:01 AM

Sorry to contact you here but I couldn't find any other way to get in touch.

I run the site JamesMaybe.com, a blog site dedicated to modern, highbrow, lowbrow art. I recently linked your site through my site in hopes of broadening my viewer’s artistic experiences, offering up different views, artists and mediums. I would be really grateful if you‘d consider linking my site, www.jamesmaybe.com to your site and together we can expand the artistic horizons of your followers as well.

Please let me know if you link my site. Additionally, I’d be glad for any feedback, comments or observations you may have pertaining to my blog or, for that matter, the world of art today.

Hi Bob, I haven't seen the film yet, not sure if has been "down under", but what's this about "the story as it should have been"? Our stories are what they are... Khalo has an international reputation which outweighs Diego's I think. Maybe without the suffering, physical and mental, she would not have been such a great artist?