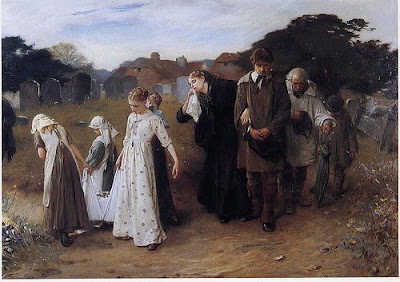 One of the many joys of reading Vincent Van Gogh’s letters is his frequent references to other artists he admired. There are, of course, references to Millais, Corot, and others we still know well today, but it is the lesser-known names, the forgotten gems, that make you scour the internet for more. The English illustrator and painter Frank Holl appears in no less than eleven of Van Gogh’s letters. Born July 4, 1845, Holl drew Van Gogh’s attention with his graphic work in the socially conscious newspaper The Graphic founded by artist and social reformer William Luson Thomas. In the days before photographic reproduction in periodicals, magazines and newspapers relied on the talents of illustrators to capture the public’s eye and, in the case of The Graphic, the public’s heart and mind. While working for The Graphic, Holl painted such socially conscious works as Her Firstborn (above, from 1876), which shows dramatically and, yes, graphically the funeral procession of a family burying a young child. The poses and expressions of the figures are operatic in their emotion. You could almost hear a Puccini aria playing in the distance. In the Victorian age, infant and childhood mortality remained an agonizing reality. Holl’s poor British subjects and Van Gogh’s Dutch peasants both knew that reality well and both artists tapped into that emotion for their art.
In 1878, Thomas assigned Holl to visit Newgate Prison and create illustrations to accompany a story. In response, Holl painted Newgate: Committed for Trial (above, from 1878), which captures the pathos of a woman and child visiting the husband and father, respectively, held prisoner there. Holl actually painted this work inside Newgate prison to get all the physical and emotional details just right. The debtor’s prison remained another harsh reality for Victorians in England as the gap between the haves and the have nots widened to a chasm. For the upper classes in England, such sights were usually reserved for the lower classes. Holl brashly brings the dark side of British society in the 1870s to those in power by first painting such works and then exhibiting them at the Royal Academy alongside more genteel works. In many ways, Holl’s personal philosophy as enacted in his art mirrors that of the Ashcan School in America when they expanded their socially conscious graphic art to paint every corner, even the darkest, of urban American reality. 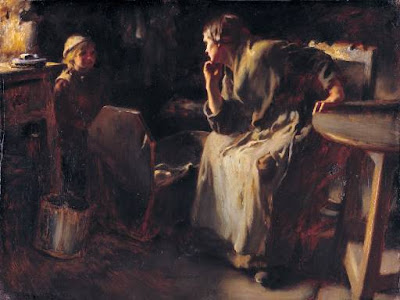 In 1877, Holl returned to the subject of childhood death with Hush! (above, from 1877). A mother asks an older child to be quiet as she anxiously watches over a sick baby. Both mother and elder sibling clearly know what might happen but don’t dare disturb the hushed silence by broaching the subject of death. In Hushed, the companion piece to Hush!, we witness the aftermath of the baby’s death. The mother covers her face while the surviving older child stands in stunned silence. The subtlety of the changed silence as conveyed in the two works illustrates Holl’s sensitivity and great psychological touch in portraying these people who too often remained invisible in British society. Unfortunately for Holl, such works did not sell well enough for him to support his own family. Holl painted portraits of the rich and powerful to provide for his family and to give himself the freedom to paint the socially conscious works closer to his heart. Working seven days a week, Holl eventually died from exhaustion at 43. "It is not too much to say that my father threw his life away by his utter inability to rest from work," Holl’s daughter later wrote. Thanks to Van Gogh, art lovers today can rediscover Holl’s paintings as well as his reforming passion.
Posted by Bob at 12:01 AM

I read your thinking about the harsh realities facing the working class in Victorian times and went ahhhh yes!

Your image was of a family where the bloke was already imprisoned at Newgate. I drew a link to my discussion about Abraham Solomon's series of paintings on working class families in terrible court cases.

Thanks for pointing the class chasm out, as an explanation of some otherwise rather strange Victorian paintings (at least to middle class eyes).

Very interesting article. I am researching Social Realism at the moment and have writtten a piece on authenticity and Social Realist art: