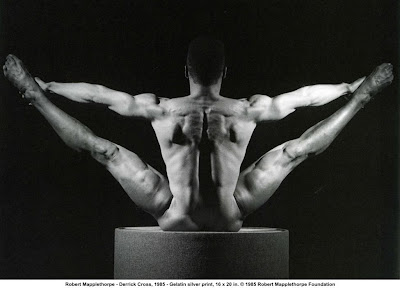 Rachel Spencer’s Financial Times review of Robert Mapplethorpe: The Perfection of Form at the Galleria dell’Accademia in Florence, Italy caught my eye last week. The Galleria dell’Accademia, home to Michelangelo’s David and other great sculptures by the master, draws a very clear, very distinct line between Michelangelo and Mapplethorpe’s approaches to the depiction of the human body. The idea itself seems fantastic. Unfortunately, according to Spencer, the execution fails to match the promise of that idea. Only a few works by Mapplethorpe appear near any of the Michelangelos, with the rest of Mapplethorpe’s work screened off in another part of the museum, as if they didn’t want the mainstream, David-loving tourists to accidentally see anything by Mapplethorpe. “Such an impoverished comparison merely teases at the possibility of a shared aesthetic,” Spencer laments, and I have to agree. Mapplethorpe’s Derrick Cross (above, from 1985) presents the human form at the peak of muscularity with all the unreality and symbolism of anything by Michelangelo, with the added twist that Mapplethorpe’s subjects actually existed in the physical world, whereas Michelangelo’s flexed and twisted only in his mind. 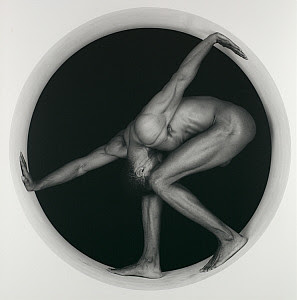 Spencer suggests Piero della Francesca as a better classical analogue for Mapplethorpe. She argues that Mapplethorpe’s dispassionate, almost mathematical approach to subjects such as Thomas (above, from 1987) follows the example of Piero more than that of the passionate, “agony and the ecstacy” Michelangelo. I’m not a big fan of the either/or dichotomy of passion version precision. There is certainly a great deal of precision and balance in all of Michelangelo’s figures at their most passionate. The David sculpture at the Galleria dell’Accademia sneers with defiance, but he stands balanced and almost symmetrically on two sturdy legs. Conversely, Mapplethorpe’s figures stretch themselves to the point of almost breaking to achieve his desired poses, but the rippling muscles and taut ligaments also speak of the AIDS epidemic of the 1980s that rippled through and stretched the gay community to its limits. I see great passion in Derrick Cross, Thomas, and other photographs of Mapplethorpe from this period when such “perfect” bodies symbolized the breaking down of gay men’s bodies by disease and the failure of the American body politic to set aside prejudice and come to their aid. 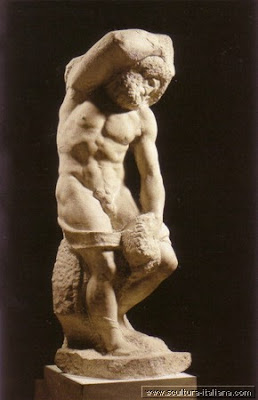 Is the unspoken issue of this Mapplethorpe—Michelangelo pairing the artists’ shared sexual orientation? Michelangelo’s sexuality remains a topic of debate for scholars, but works such as Prigione Barbuto (above, 1530), one of Michelangelo’s unfinished sculptures of slaves, make more sense when seen in a homoerotic way. Sadly, Mapplethorpe remains the untouchable third rail of American art history for many museums, even twenty years after his death by AIDS. Perhaps only in Europe could Mapplethorpe be allowed to stand beside masters of the Western heritage, whereas American art continues to segregate Mapplethorpe and other homosexual artists into a defined zone separate from the mainstream. “Here, the absence of sex shots haunts the show like Banquo’s Ghost,” Spencer writes of Robert Mapplethorpe: The Perfection of Form’s lacking of Mapplethorpe’s more notoriously explicit photographs. Perhaps the best way to exorcise that erotic ghost once and for all is to allow it to walk freely and be seen, not only for better understanding Mapplethorpe but also for better understanding Michelangelo.
Posted by Bob at 12:01 AM

Struck the imagination of the Robert Mapplethorpe. Thanks for the link.
In the words of Dostoevsky - Beauty will save the world.
Compare Michelangelo and Mapplethorpe is not correct, the same as comparing apples and pears: both in its taste.
Michelangelo - the classics, it would be more equal and be inspired.
Mapplethorpe is the epitome of today's art.

It shows that how beauty will save world. This is really amazing.

Cash Online Get Easy cash at your door step

Are you unable to cope with the wrinkles in your face? If your facial deformity is making you unattractive in front of your hubby and he is drifting away from you, then it is time for you to find out an appropriate solution. A host of skincare treatments are available to erase the wrinkles from your face completely but if you opt for the Revitol cream, the look of your face would be entirely changed and the lines on your face would be a matter of a bygone era. Revitol cream is a product of the Revitol company and all Revitol natural skincare products are available for you at www.herbsncures.com/.