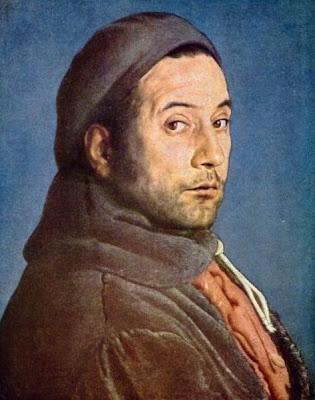 Surrounded by the rising fascist movement in Italy in the late 1920s and 1930s, the painter Pietro Annigoni played the role of the rebel artist to the hilt, sometimes literally. With his fellow bohemian artists, Annigoni (above, in a 1946 Self-Portrait) would get drunk on wine in bars, fire pistols, challenge others to fencing duels, and sometimes even throw knives. Legend has it that Annigoni once even tossed a blade towards an uncooperative model. As penance, Annigoni would cut his own left forearm with a knife as a reminder to be good. In Annigoni: Portrait of an Artist, you find yourself cut by the intensity of Annigoni’s vision for art, which combines the Renaissance figurative tradition with a full comprehension of the horrors of the twentieth century. Called one of “The 100 Best Movies You've Never Seen” by film critic Richard Crouse, Annigoni: Portrait of an Artist is finally available on DVD for all art lovers to see perhaps the greatest art documentary they’ve never seen but also to discover the greatest artist of the twentieth century they’ve never heard of. 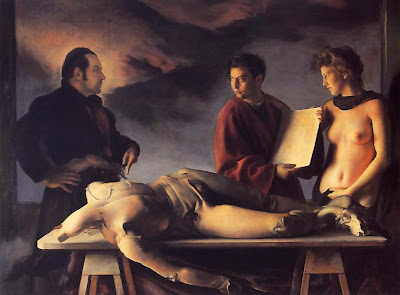 The film relies heavily on Annigoni’s own words from his diaries, which reanimate the soul of the artist as much as his paintings. Annigoni recalls his family’s moving to Florence and that city’s “imaginary reality” as the turning point of his life. The art of the city literally intoxicates him. Choosing the artist’s life, Annigoni enrolls in the Accademia di Belle Arti (Firenze) hoping to follow in the Renaissance tradition but soon recognizes that the academy, too, has turned its back on its history in pursuit of modernism. For Annigoni, modern art represented a “chaotic disintegration” that separated art from the symbolism found in nature. Such separation seemed a “tragic loss of love for life” that Annigoni could not bear. Instead, Annigoni painted his world as he felt the Renaissance masters would, but not in slavish devotion. “Only people who know nothing about art believe that a style is repeatable in a different age,” Annigoni countered. After watching Hitler, Mussolini, and the destruction of Europe during World War II, Annigoni could not possibly paint Raphael-esque angels. Instead, the unreal “reality” of Annigoni’s Sayest Thou That This Is the Man? (above, from 1953) spoke to the facts of modernity in the language of the past as only an atheist who confessed a “nostalgia for god” could. Looking at paintings by Annigoni of the post-war period reminded me of the great films of the post-war Italian cinema. Vittorio De Sica’s 1948 The Bicycle Thief, Federico Fellini’s 1954 La Strada, Michelangelo Antonioni ‘s 1960 L'avventura , Pier Paolo Pasolini’s 1961 Accattone, and many other films feature the same haggard faces of the Italian people descended from their Renaissance ancestors yet arrived upon a seemingly different planet. 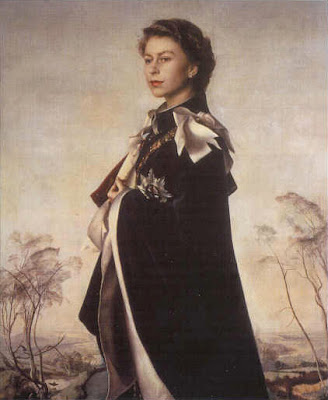 Annigoni found the look for many of his painted characters in the faces of the refugees of World War II still roaming the streets of Italy, just as Michelangelo saw saints and Madonnas in the visages of beggars and whores. Despite painting the powerless so often, Annigoni soon found his talents sought after by the powerful. After his 1956 Portrait of Queen Elizabeth II (above), Annigoni became the most pursued portraitist of his time. Yet, as Annigoni’s student Michael John Angel recounts, people came to Annigoni “to be made into an Annigoni”—with all the beauty of his technique yet also all the sadness of his worldview. The youthful knife thrower switches to a silent slipper of stilettos in these portraits. Even the regal Queen Elizabeth II looks wistfully into the distance, as if Annigoni had infected her with his memories of Italy’s agony during their sittings. It is in these paradoxical portraits that the paradox of Annigoni rises closest to the surface of his art. A lover of life who bemoaned modern art’s rejection of life itself, Annigoni could be cynical and pessimistic just as intensely. In many ways, modern art simply portrayed the larger descent into darkness that all of humanity was in the midst of. A trip to the United States in the 1960s to paint some portraits exposed Annigoni to the full force of American commercialism and vanity, confirming his bleak view of the future perhaps once and for all. 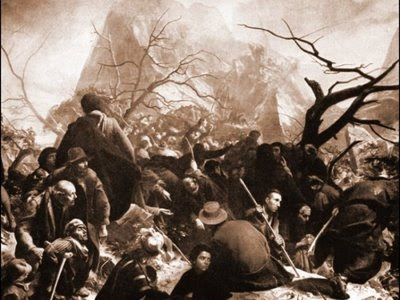 Annigoni cast the conflict between his style and modern art often in biblical terms. Modern art was a “poisoned fruit” that could never tempt him, regardless of profitability. In Sermon on the Mount (above, from 1953), Annigoni paints himself on the peak with his back turned to the viewer as he preaches to the faithful. As one commentator in the film says, the wealthy chose Annigoni, but Annigoni chose the beggars. To the very end, even in soaring church frescoes, Annigoni retained the common touch, the human link, that made his art meaningful to him and continues to make it meaningful to us. For those who knew or studied with Annigoni, the man still lives today as vibrantly as the colors of his paintings. To hear students or students of students speak his name, you’d imagine Annigoni was more myth than man. Yet, Annigoni: Portrait of an Artist never fails to show the man who could hurl a knife at your ear one day and then paint an image that could pierce your heart the next as anything less than magnificently human.

[Many thanks to Stephen Smith for providing me with a review copy of Annigoni: Portrait of an Artist. A short clip from the film is available on YouTube here.]

great! thanks for enlightening me about this guy. his work does have a magnetic kind of melancholy.

Maybe it's because I've been reading about Caravaggio, but this guy seems to be channeling the great M. His work is also equally fascinating. Where do you find these artists? Thanks for the blog!

you have an amazing blog here...it shows greatly your love and passion for the art...

I am a great fan of Annigoni, and especially of his portrait of Queen Elizabeth II; I have a print of a sketch for this, signed by the maestro.

Enjoying your blog very much.

Do they talk about where the painting "Sermon on the mount" is in the film? It always says private collection. would love to see it in color. There is a picture of him working on it, so you can get a sense of scale.