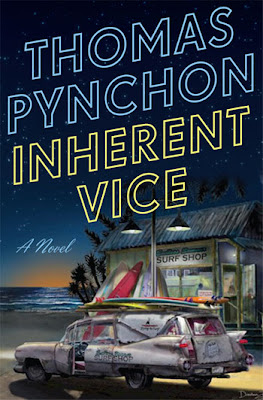 I have to say that I was taken aback when I first saw the cover art (above) for Thomas Pynchon’s latest novel, Inherent Vice. The novel, which I just finished, is excellent and, at 370 pages, rather “light” for Pynchon in terms of sheer words but as weighty as ever with deep thoughts and cosmic wit. Pynchon riffs on the noir conventions of the private investigator but with a neon-colored, drug-altered twist in placing the PI in California around 1970, during the peak of the Charles Manson-inspired paranoia and the beginning of the end of the 1960s hippie culture. The dime store quality of the artwork could easily trick someone not recognizing Pynchon as one of the highest of highbrow novelists into thinking they’ve picked up a run of the mill “beach read.” I think Pynchon himself would enjoy playing that little joke on an unsuspecting reader, so maybe that’s the reasoning behind the cover art. I, however, have another suggestion for a cover, perhaps for the second edition. 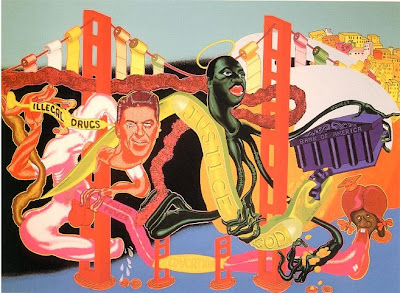 Pynchon creates a landscape of pure paranoia—the straights fear every hippie is a Manson-in-the-making ready to murder them in their beds, while the hippies fear the straights are trying to kill them off by more “officially sanctioned” means. Peter Saul’s The Government of California (above, from 1969) visually captures the public madness of that place and time, setting the ominous mug of Ronald Reagan, then governor of California but already setting his sights on the highest office, in a place of prominence. If Manson is the monster under the bed for the straights in Inherent Vice, Reagan is the monster ready to spring out of the closet for the hippies. The acid colors and twisted forms of Saul’s art mesh perfectly with similar effects Pynchon achieves in his psychedelic prose.

If anyone out there knows how to get in touch with the elusive Mr. Pynchon, please pass on my idea for a second edition cover. If Mr. Pynchon himself is reading, please feel free to drop a line in the comments. To confirm that you’re the real deal, please attach a recent picture, too.
Posted by Bob at 12:01 AM