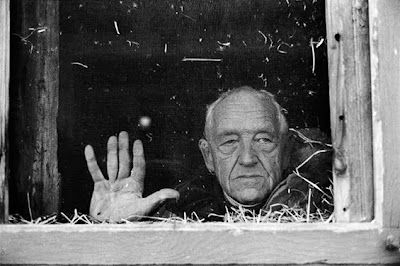 [Andrew Wyeth’s birthday, July 12th, passed while I was on hiatus. This is me catching up. I couldn’t let Andy’s birthday pass on by unnoted.]

When Michael Jackson passed away this past summer, I found myself thinking of the story I had heard of the King of Pop meeting painter Andrew Wyeth, who passed away last January. Maybe it was the closeness of their deaths. Maybe it was my imagination trying to picture what the two men would have in common to talk about. I’m not sure if they ever met, but I think the conversation would have eventually swung around to childhood and memory. MJ named his mansion complex Neverland, after Peter Pan’s place where little boys never grow up. Even into his nineties, Andy Wyeth had that little boy lost quality. The photograph above, showing Andy musing upon the landscape of his beloved Chadds Ford as he presses his hand against the farm window screen, shows how the old man could always get lost in the memories of his childhood. Michael Jackson used his money and surgery to turn back the hands of time. Andrew Wyeth used the power of his vision and the grace of his painting techniques to recapture time over and over again. In many ways, Wyeth’s present was a perpetual replaying of the past. 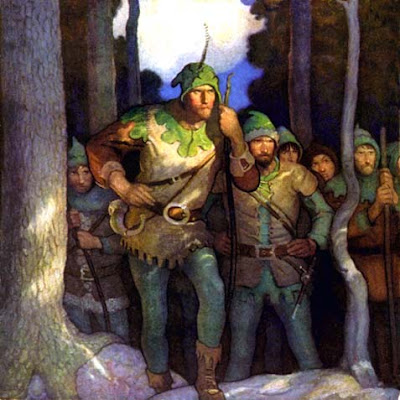 Photos and home movies exist of young Andy Wyeth playing the lead role of Robin Hood, with the neighborhood children, including many African-Americans, cast in the role of the Merry Men. Many of those children grew up with Andy and appeared in portrait after portrait as time passed but part of them always stayed the same. Not only did the woods of Chadds Ford provide the perfect Sherwood Forrest, but costumes were also freely available, thanks to the prop collection of Andy’s father, N.C. Wyeth, who illustrated tales of Robin Hood (above). Andrew Wyeth himself never painted the characters of his childhood, perhaps out of fear that it would be too close to his father’s work. Andy’s style of painting was 180 degrees different from that of N.C.’s for multiple reasons. But whenever you look at any painting set in Chadds Ford, it’s hard not to imagine little Andy dressed up as the devil may care thief hiding behind the next tree. 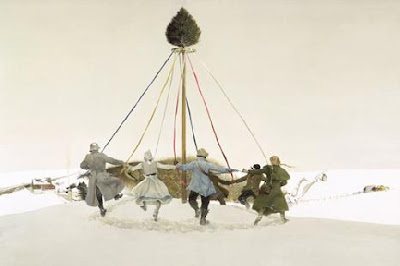 It’s been seven months since Wyeth’s death. After the initial mourning and memorials, the recognition of Wyeth’s achievement has slowed and, perhaps, stilled. The privacy he yearned for in his later years has become inertia on the part of the estate that should be opening up doors into his work rather than closing them. For me, the most enduring legacy of Andy Wyeth will be his sense of fun, even when his works strike the deepest and darkest notes. Wyeth’s Snow Hill (above, from 1987), painted when he turned 70, shows a collection of characters of his paintings frolicking like children in the snow around a May pole. The danse macabre becomes a joyful celebration of life, even when nature itself sleeps under the winter’s cold. If you follow the streamers down to each character, you’ll find that one streamer leads to nothing, suggesting that the artist himself invisibly joined the party. It’s time for Andy to come out of the shadows and reappear as the life of the party he truly was.
Posted by Bob at 12:01 AM

Wonderful post, long one of my favorite illustrators. Indeed, thanks!

Amazing posting, you have great knowledge about this field.


Cash Online Get Easy cash at your door step

Thanks for this post, and a side of Andrew Wyeth I never thought about it. But I find that his paintings are more about something eternal within the confines of time. So that your awareness of both is heightened by viewing his works. I always enjoy your blog, and am from Philadelphia, a city I love, so that's an even extra bonus!