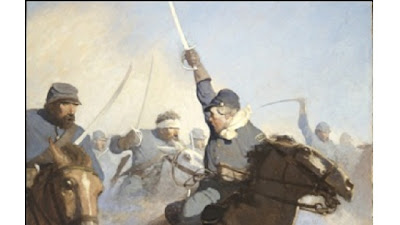 This year marks the 150th anniversary of the beginning of the American Civil War. The process of looking back at that time must also include looking back at previous attempts to look back, including (and perhaps most especially) remembrances around the 50th anniversary of the conflict’s beginning, when World War I and the question of America joining the fray in Europe plagued the national consciousness. Romance in Conflict: N.C. Wyeth’s Civil War Paintings, which runs at the Brandywine River Museum through March 20th, focuses on the way that preeminent illustrator N.C. Wyeth envisioned the War Between the States for a new age through the prism of old-fashioned values of honor and duty. Please come over to Picture This at Big Think to read more of "Call to Duty."


[Many thanks to the Brandywine River Museum for providing me with the image above and other materials for Romance in Conflict: N.C. Wyeth’s Civil War Paintings, which will run at the museum through March 20, 2011.]
Posted by Bob at 6:51 PM

Hi. I'm trying to spread the word among Wyeth fans of an auction item for a good cause: a Victoria Wyeth tour of works by Andrew Wyeth, plus brunch and an overnight stay near the Brandywine. A great weekend in a beautiful place for somebody. Proceeds of the auction go to scholarships for young women in various fields of communications:

(Victoria is Andrew Wyeth's granddaughter. My husband and her father are first cousins.)

Thanks for any forwarding or posting of this.