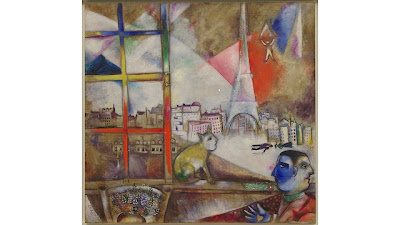 “[I]n La Ruche you either came out dead or famous,” Marc Chagall said of the Parisian refuge of bohemian artists from Eastern Europe that he called home during his first Paris period. French for “the beehive,” La Ruche buzzed both with creativity and camaraderie during Chagall’s time there. The circle of friends Chagall formed around himself influenced not only his art but widened his spirit as he witnessed a world far bigger than the Vitebsk village he left behind. In Paris Through the Window: Marc Chagall and His Circle at the Philadelphia Museum of Art, visitors gain access to Chagall’s circle of friends and get a sense not of a “hive mind,” but rather of a unity born of diversity sharing the same hardships and passions. Please come over to Picture This at Big Think to read more of "Circle of Friends."

[Many thanks to the Philadelphia Museum of Art for providing me with a review copy of the catalog to, the image above from, and other press materials for Paris Through the Window: Marc Chagall and His Circle, which runs through July 10, 2011.]

[A REQUEST AND A CONTEST: Please consider making a donation to help the people of Japan. Some of the organizations doing good in that terrible situation are Doctors Without Borders and The Red Cross. Please consider helping in some way. And if you do send a donation, mention it in the comments to this or any other post and I’ll put your name in a contest to win a copy of See/Saw: Connections Between Japanese Art Then and Now by Ivan Vartanian and Kyoko Wada (my review here). Honor rules apply, so you do not need to send “proof” of a donation. Also, the contest is open only to U.S. residents (but anyone can donate, of course). Contest ends at midnight EDT on April 1, 2011 and a name will be pulled from a hat the next day.]
Posted by Bob at 7:08 PM

This looks so interesting! There's a current Chagall exhibit in Seoul which chronicles his art through various periods of his career; showcasing his paintings, drawings, etchings and murals. It was the largest Chagall retrospective we ever had here. Very inspiring. I wish they would follow up that exhibition with this one - it would create an intriguing flow. Wishful thinking on my part. Thanks for the info!