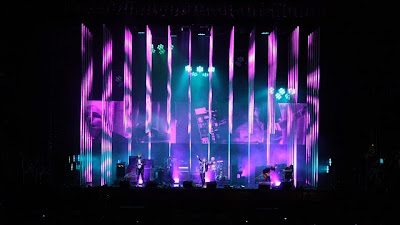 “It never phased him that we’d call out different tunes from the stage and change the set around endlessly to stop from being bored,” Radiohead front man Thom Yorke says of the group’s lighting and stage designer Andi Watson. “It meant that it became less of a show of self aggrandizement for the artist, impressing an audience for its own sake and filling a huge space, and more a response to what was really happening musically night by night.” In Bullet Proof... I Wish I Was: The Lighting and Stage Design of Andi Watson, Christopher Scoates and others examine just how Watson sculpts light to help audience connect with the music of acts such as Lenny Kravitz, Oasis, Counting Crows, and especially Radiohead, with whom Watson’s worked since meeting them in 1993 up to and including their last tour in support of In Rainbows. Using the whole spectrum of aesthetics and technology, Watson’s “rainbow connection” with audiences not only draws heavily from artistic influences of the past, but also spotlights a brighter, greener future for the field of lighting and stage design. Please come over to Picture This at Big Think to read more of "Rainbow Connection."

[Many thanks to Chronicle Books for providing me with the image above and a review copy of Bullet Proof... I Wish I Was: The Lighting and Stage Design of Andi Watson by Christopher Scoates, with a foreword by Thom Yorke and essays by Dick Hebdige and J. Fiona Ragheb.]

[All apologies to Kermit the Frog for borrowing the title of his hit song for the title of this post.]
Posted by Bob at 6:54 PM

Did you see this article by Marica Hall?

Sacred Images in the Renaissance

Reminded me of some of your points over the years!

This blog is bookmarked! I really love the stuff you have put here.