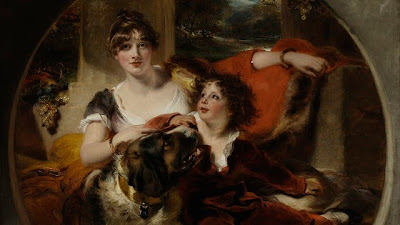 “Nobody has ever painted eyes, women’s eyes particularly, so well as Lawrence,” Romantic painter Eugene Delacroix wrote after visiting British painter Thomas Lawrence in 1825 and finding himself bowled over by his portraits. “And those parted lips which are completely charming. He is inimitable.” In the exhibition Thomas Lawrence: Regency Power and Brilliance, which runs at the Yale Center for British Art through June 5, 2011, Lawrence once again bowls over viewers with the ravishing beauty of his painted ladies, the subtly erotic attraction of his youthful subjects, and the powerful, peacock-like men hailing from the halls of power. Men ruled the day when Lawrence painted, yet today it seems as if it is the women and children who come first—not in the classic chivalric call of high seas lifesaving, but rather in a resurfacing and reevaluation of Lawrence’s art that may mark the salvation of the heyday of British portraiture. Please come over to Picture This at Big Think to read more of "Women and Children First."

[Many thanks to the Yale Center for British Art and Yale University Press for the image above from and a review copy of the catalog to the exhibition Thomas Lawrence: Regency Power and Brilliance, which runs through June 5, 2011.]
Posted by Bob at 7:38 PM

That occurred to me a couple of weeks ago when I was writing about the Caton sisters. The most powerful portrait of Marianne Caton can from Lawrence - not simpering and helpless, but strong and intelligent.

The Mona Lisa has a quite extraordinary pair of eyes as well.