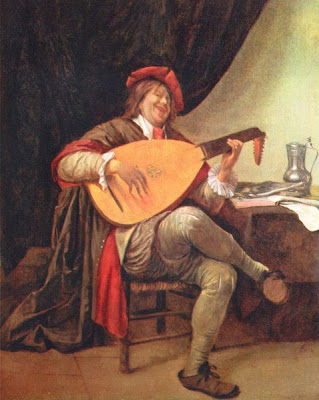 While Rembrandt painted introspective self-portraits and Vermeer designed quiet, meticulously lit interior scenes, Jan Steen painted the partying side of seventeenth century Dutch life and art. Between his birth in 1626 and his death on February 3, 1679, Steen crammed plenty of life into his fifty-three years on this earth. His Self Portrait as a Lutenist (above, from 1660 to 1663) shows how he always was the life of the party. Like his slightly earlier contemporary Frans Hals, Steen painted scenes of domestic happiness for the growing middle class market. About 350 of the 800 paintings he was known to have finished survive, giving us a healthy look at this joyful artist. 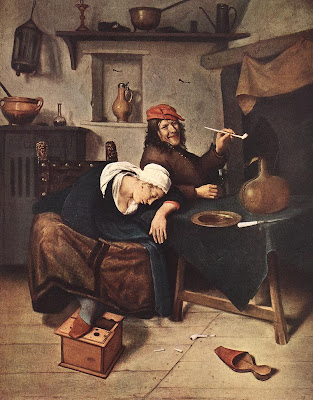 Steen’s grew up surrounded by alcohol in the household of his father, who was a brewer. Intoxication is clearly the theme of The Drinker (above, from 1660). Interestingly, Steen chose to paint himself and his wife, Margarete, as the tipsy couple. Steen looks directly at the viewer, smiling almost idiotically with pipe in hand, over the unconscious form of his wife, whose one shoe has fallen off and lays in the foreground. Self-portraits such as this led to legends that Steen himself drank too much, but no facts back up that argument. It’s a remarkable portrait for the sheer unflatteringness of the depiction of himself and his wife. Steen rejects any glamour in getting drunk, choosing instead to depict the human frailty at the source of seeking solace in the bottle. 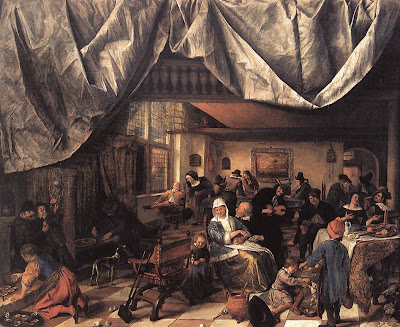 As wonderfully lively as Steen’s party pictures are, there is always a moral tucked within. The Life of Man (above, from 1665) shows a typical tavern interior full of people of all ages enjoying themselves with food and drink. Everyone seems to be eating oysters, the famous aphrodisiac, revealing that more than playful flirting was on their minds. At the top of the painting, a curtain is pulled back, making the scene seem more theatrical than real. Beneath the curtain, in the attic above the partiers, a young boy blows soap bubbles while sitting next to a human skull. The skull and soap bubbles symbolize the reality of death and the fragility of life, respectively, something the revelers below have momentarily forgotten. In showing both sides in this tableau, Steen runs the whole gamut of human existence—both the joy and the sorrow. Steen clearly knew how to party, but also knew the score when the party was over.