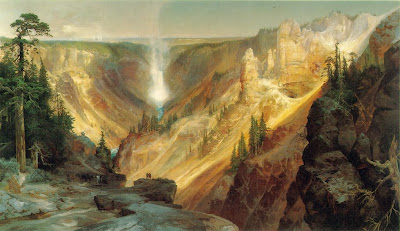 Not many artists can say they have a mountain named after them, but Thomas Moran can. Born February 12, 1837, Moran took the Romantic love of nature fostered by Thomas Cole and the Hudson River School and brought it to the American West, capturing the beauty of untouched landscapes such as those of Wyoming that would become Yellowstone National Park. Paintings such as Moran’s Grand Canyon of the Yellowstone (above, from 1872) helped inspire the U.S. Congress to creat the National Park System in 1916 to preserve these natural settings for future generations. Today, the National Park Service site contains a collection of Moran’s paintings of Yellowstone as a lasting tribute to his contribution to saving this land. 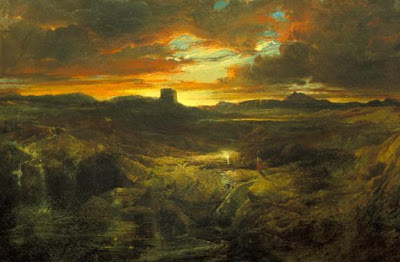 Moran may have been the purest of the American Romantic landscapists. He recognized the genius of J.M.W. Turner when few others did, and even travelled to England and Europe in the 1880s to paint landscapes in the same exact places that Turner had years before. In addition to depicting real-life landscapes, Moran created landscapes of the imagination inspired by the poetry of Percy Bysshe Shelley and Robert Browning, among others. Browning’s poem Childe Roland to the Dark Tower Came inspired a painting by Moran of the same name (above, from 1859). When Moran arrived at Yellowstone with the government exploratory team to chart that undiscovered country, the hot mud lakes and geothermic geysers must have seemed like one of his imaginary landscapes come to life. 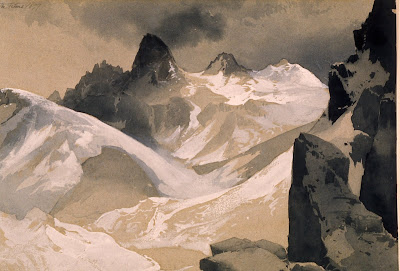 Moran’s paintings of the American West are as diverse as the landscape itself. Just in Wyoming, Moran could paint both the geysers and gorges of Yellowstone as well as The Tetons (above, from the 1870s) that would become Grand Teton National Park. Mount Moran, one of the highest and most difficult mountains to climb in that range, stands today as a testimony to the power of art to shape minds and preserve the natural beauty it captures. Whereas artists such as Frederick Remington traveled west and created fiction, Moran ventured forth and copied the majestic fact of the American landscape. Moran may have applied some of his own Romanticism to those depictions, but I prefer to see that as just another part of the truth of the landscape rather than false embellishment.
Posted by Bob at 8:13 PM