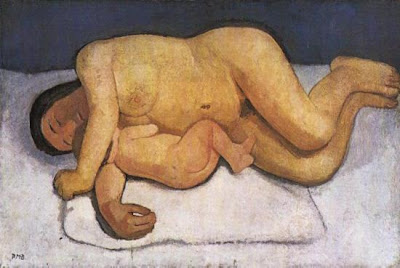 That is what you understood: the ripe fruits.
You placed them in bowls there in front of you
and weighed out their heaviness with pigments.
And so you saw women as fruits too,
and saw the children likewise, driven
from inside into the forms of their being.
And you saw yourself in the end as a fruit,
removed yourself from your clothes, brought
yourself in front of the mirror, allowed yourself
within, as far as your gaze that stayed huge outside
and did not say: ‘I am that’: no, rather: ‘this is.’
So your gaze was finally free of curiosity
and so un-possessive, of such real poverty,
it no longer desired self: was sacred.

From Requiem for a Friend by Rainer Maria Rilke

When Max Beckmann told Marie-Louise von Motesiczky that she could one day be Germany’s greatest woman artist since Paula Modersohn-Becker, that was high praise indeed. Born February 8, 1876, Modersohn-Becker brought a female perspective to German Expressionism, especially in her exploration of her own sexuality and role as a mother. In Mother and Child Lying Nude (above, from 1907), Modersohn-Becker paints a woman and child in all rounded fertility, as if they were the “ripe fruits” to which her friend Rainer Maria Rilke alludes to in his requiem to Modersohn-Becker after her death. Artists have depicted the female nude since the beginning of art, but such images from the imagination of a female artist add a whole new dimension, seeing the sexuality from within. Again, to use Rilke’s words, Modersohn-Becker looked at her gender and said not “I am that” but rather “This is,” affirming rather than objectifying her body and it’s procreative power. 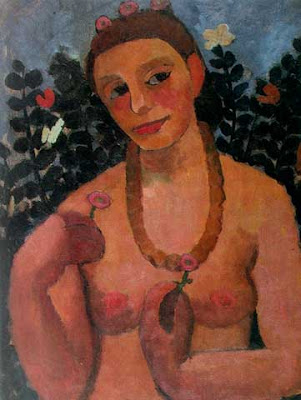 Modersohn-Becker painted many portraits, landscapes, and still lifes in her career, but after 1906 she painted a series of self-portraits that redefined both the self-portrait and the nude for female artists. Her Self-Portrait: Half-Naked with Amber Necklace (above, from 1906) shows the artist looking directly at the viewer, adorned with an almost primitive looking amber necklace. This painting inspired Rilke to write the following in his Requiem:

Why do you want me to believe that in the amber beads
at your throat there was still some heaviness
of that heaviness that never exists in the other-side
calm of paintings: why do you show me
an evil presentiment in your stance:
what do the contours of your body mean,
laid out like the lines on a hand,
so that I no longer see them except as fate?

Modersohn-Becker’s nudes lack any sexiness. They’re heavy and monumental, like a statue. Instead of clothes, she wears the assets of her sexuality like accessories, which the necklace accessory itself accentuates. The “contours of her body” that befuddle Rilke become a statement of “fate”—the fate as a woman that Modersohn-Becker does not regret (i.e., sorry that she’s not a man) but rather embraces as a challenge and a blessing. 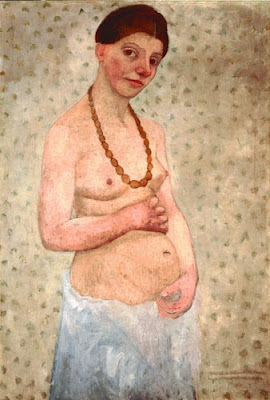 It’s hard not to look at Modersohn-Becker’s Self-Portrait on Her Fifth Wedding Anniversary (above, from 1907) and feel sad. She depicts herself proudly pregnant, her body swelling physically as her soul itself seems to grow larger. Modersohn-Becker gave birth to a daughter, named Mathilde, in November 1907. Less than a month later, Paula Modersohn-Becker died from an embolism. She left behind a long legacy of love and friendship despite the relative shortness of her life and career, inspiring Rilke to write his Requiem a year later and inspiring German and female artists ever since to look within to see their world.