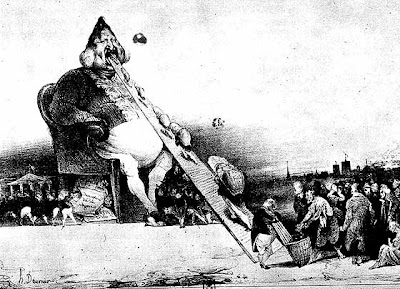 When Honore Daumier caricatured King Louis Philippe as Gargantua (above, from 1832) he won a huge audience—and one very angry enemy. Born February 20, 1808, Daumier spent six months in prison for tweaking the king with his art, pointing out how the monarch placed in power by the July Revolution in 1830 wasn’t much better than the person he replaced. Daumier spoke truth to power—loud and clear. In both prints and sculptures, he showed the weaknesses and foibles of the rich and powerful as well as the effects of that class’ actions on the poor and powerless. Prison did little to blunt the sharpness of Daumier’s pen. 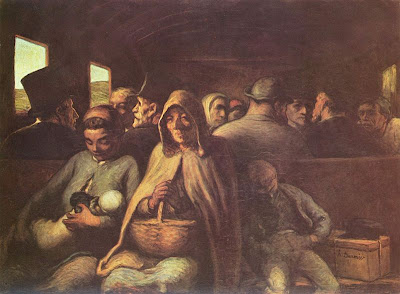 By the 1840s, Daumier shifted away from illustration and depictions of the upper class to painting and portrayals of the middle and lower classes. His The Third Class Wagon (above, from 1864) caricatures the faces and figures of the French peasant class huddled together like sheep, but with affection rather than disdain. Despite the cramped quarters, the people in the background seem vitally engaged in conversation, sharing in their common condition. The figures in the foreground—the woman and child, the elderly woman, and the little boy—each tell small little stories with the simplest details. I especially love the hat of the little boy sitting on the suitcase upon which Daumier has signed the painting. The old woman in the center brings to mind Van Gogh’s later paintings of peasants, such as his The Potato Eaters. Such a modern approach placed Daumier far beyond his peers, a man born before his time. 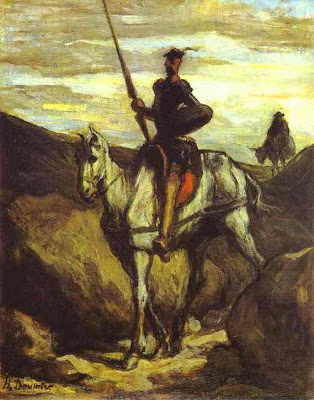 Despite his early success and abundant talent, Daumier’s choice of subject and political stance didn’t make him a rich man. Towards the end of his life, Daumier found himself part of the impoverished class he painted with such tenderness. Fortunately, his friend Jean-Baptiste-Camille Corot provided him with a home to live out his final years. “It is not for you that I do this,” Corot said to the protesting, still-proud Daumier. “It is merely to annoy your landlord.” To the end, Daumier could still get under the skin of those in positions of authority. Like the characters in his painting, Don Quixote and Sancho Panza (above, from 1849-1850), Daumier never stopped tilting at windmills, fighting the good fight with his imaginative, romantic spirit against all the odds to the bitter end.