A Series of Tubes

An artist that should find a place in U.S. Senator Ted Stevens’ heart, Fernand Leger took the Cubism of Braque and Picasso and rounded it off, creating his own form of Cubism later known as Tubism. (And, no, surfers did not call it “tubular.”) Born February 4, 1881, Leger painted works such as The Card Players (above, from 1914) while still under the influence of Italian Futurism. In The Card Players, Leger creates players more machine than human, consisting of a series of tubes connected together more than anything resembling flesh and blood. A friend of other abstract artists such as Robert Delaunay and Francis Picabia, Leger painted in an increasingly abstract style up to his involvement in World War I, which changed his work immensely as the marriage of man and machine no longer seemed like such a fine idea. 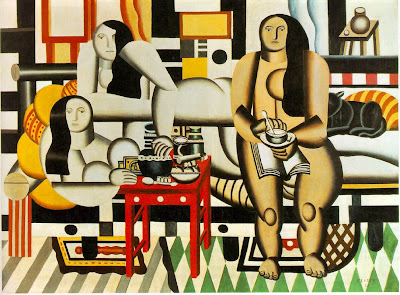 After the war, Leger returned to a more classical style of painting in works such as Three Women (above, from 1921). The rounded forms and cylinders of Tubism remain, but Leger paints here flesh and blood rather than the cold, hard steel of The Card Players. Like many artists between the wars, Leger couldn’t return to a purely abstract style or develop a purely classical one, so he creates hybrids such as Three Women, a unique take on the nude that borrows from everyone from the Greeks up to Cezanne in portraying the nude female body. Whereas some of his abstract brethren, such as Picabia, followed the path of chaos even further after the Great War, Leger stepped back from the precipice and reevaluated his art. 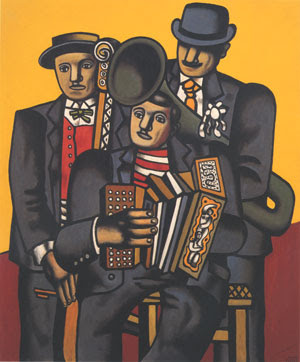 While living in the United States during World War II, Leger became less and less abstract in his style, creating works such as Three Musicians (above, from 1944). Like Picasso’s Three Musicians , Leger takes advantage of the interplay of the three figures and their instruments to create interesting contrasts of color and shape. Unlike Picasso, one of the sources of his early Tubist Cubism, Leger no longer relies on heavy distortion of the human form. Their faces are stylized masks in many ways, but nothing like the excessive primitivism of Picasso’s faces. Near the end of his life, Leger turned to Socialism in hopes of making a better world. His desire to bring a sense of humanity to the often cruel twentieth century succeeded in humanizing his art.