If you look closely at the cover of the Beatles' Sgt. Pepper's Lonely Hearts Club Band, festooned with so many famous faces, between playwright George Bernard Shaw and soccer star Albert Stubbins and peeking out from behind the feather in George Harrison’s hat, you’ll find the face of iconoclast American sculptor H.C. Westermann. Born December 11, 1902, Westermann led a colorful life, doing everything from performing as an acrobat to working in logging camps and rail yards before serving as a navy gunner during World War II in the Pacific Theater. Watching Japanese kamikaze attacks kill American sailors as well as the attacker, Westermann developed an anti-war, anti-ideological, and anti-materialist philosophy that refused to accept a world in which humans killed other humans, and sometimes themselves, in blind allegiance to an idea. Westermann’s sculpture titled Memorial to the Idea of Man If He Was an Idea (closed) (above, from 1958) quirkily calls into question the values that compel nations and people to wage wars. The robotic look of the “memorial” comments on the blind automatism of citizens who support governments unquestioningly. The single, cyclopic eye mimics the lack of vision of such people, who refuse to see any depth or complexity to the issues of the day. Man is not an “idea,” Westermann says. Man is man, nothing more or less, with the freedom to be anything and not just a predetermined idea. 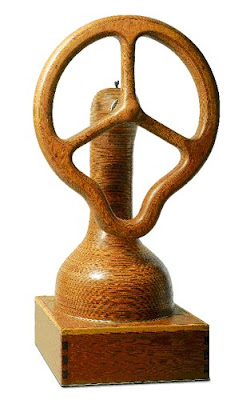 It’s easy to see how the Beatles wanted to include Westermann among their pantheon of heroes. A rugged, very physically active man as well as an infectious thinker, Westermann showed the way for other artists to find their own way, such as the equally unconventional and anti-establishment painter Peter Saul. In the 1950s and 1960s, when America’s post-war profile in the world grew exponentially and the American way of life in all its materialist glory reigned supreme, Westermann saw only darkness behind the gleam of shiny new cars and refrigerators. In Antimobile (above, from 1965-1966), Westermann shows the twisted sensibility of a country that made an idol out of the automobile by sculpting a literally twisted automobile steering wheel. Westermann targets the American infatuation with the car as a prime example of how the country has lost its way spiritually while consumed by getting someplace physically. Westermann sees America getting nowhere fast. 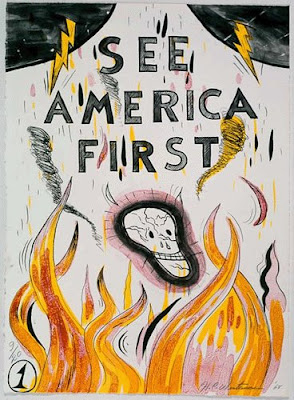 In addition to sculpture, Westermann tried his hand at printmaking with the same iconoclastic touch. Turning a popular advertising slogan for tourism on its head, Westermann created a series of prints titled See America First (Untitled No. 1 is above, from October 1968). Advertisers wanted Americans to travel domestic and spend their money in America to help fuel the American economic machine. Westermann calls on people to open their eyes and actually see the America they’re traveling in as a place desperately in need of a spiritual awakening. As flames lick upwards and surround a bare skull, the words “See America First” take on a sinister cast that belie the sunny optimism of the post-war period. Westermann’s work is perceived by some as anti-American, but I only get a sense of the love he had for his country as an assemblage of people rather than as an abstract concept grown beyond the control of those same people. If we could only see America first as just the combined desires and hopes of ordinary people, then those desires and hopes might actually be realized.
Posted by Bob at 12:01 AM