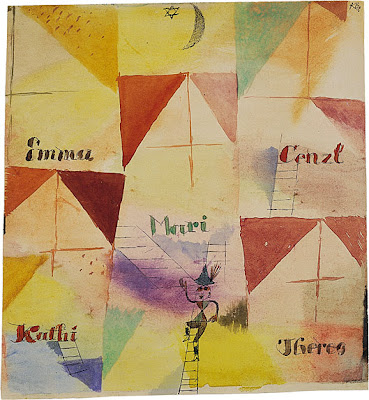 When not drawing or painting, Paul Klee could most often be found playing his beloved violin. Born December 18, 1879, Klee played the violin in orchestras, reviewed concerts and musical theater for newspapers, and even married a pianist in his life-long love affair with music. In 1919, the still-single Klee painted The Bavarian Don Giovanni (above), in which he casts himself as Mozart’s libidinous Don Giovanni climbing a ladder surrounded by the names of the five women Klee was then conducting affairs with, several of whom were opera singers. Borrowing from Mozart’s opera, Klee personalizes the scene with his own affairs of the heart and creates a wholly new personal visual language. Critics try to tie Klee to movements such as Expressionism, Cubism, Surrealism, and even Orientalism, usually more out of proximity of time and place, but Klee’s art more often exists in a time and place of his own choosing. A close friend of Wassily Kandinsky, Klee taught with the great theorist at the Bauhaus but always seemed to have more of a personal theory cobbled together from the ideas of others than a coherent system to share with others. Ultimately, Klee worked in line and color, simplifying his art to a level of childlike grace as the world around him grew more darkly complex. 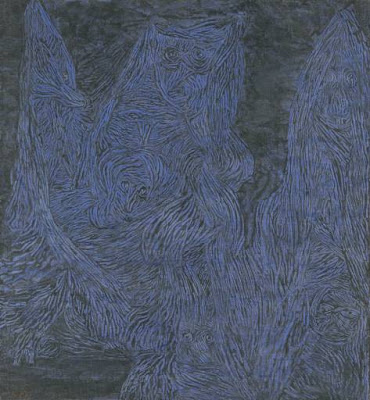 The Nazis forced Klee to resign his position at the Bauhaus in 1933, at the height of his creativity. Klee created more than five hundred works in that fateful year of 1933 despite picking up his life and moving to Switzerland. In 1935, Klee painted Walpurgis Night (above), the sanitized pagan ritual celebrating the end of winter and the coming of spring. Perhaps Klee allowed himself a moment of optimism, breathing the free air of Switzerland and thinking that the worst was behind him. Sadly, in 1937, the Nazis removed Klee’s work from German museums and listed him along with other modernists in the infamous "Degenerate Art" exhibition. Toward the end of his life, illnesses limited Klee’s productivity. In response, Klee simplified his art even further, creating works even more childlike in scope while still sophisticated in terms of line and color up until his death in 1940. Walpurgis Night is also the time when witches and the darkest beasts of Hell roam the earth as the split between the seasons is healed, so perhaps Klee also recognized the horror that lay ahead for him and Europe in 1935. Klee’s ability to convey different possibilities in a single image, all of which connect to his personal life, continues to make him a compelling artist. 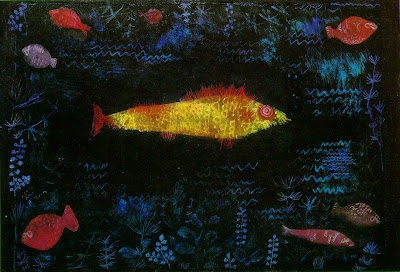 For all the sadness of his last years, Klee is one artist whose story can never end on a sad note. Works such as The Goldfish (above, from 1925) speak of the joy and playfulness of an artist who found infinite pleasure in a line or color itself, no matter how simple. Klee expressed his sense of his own timelessness in his own epitaph: "I cannot be grasped in the here and now, for my dwelling place is much among the dead, as the yet unborn, slightly closer to the heart of creation than usual, but still not close enough." Klee never lost his faith in the power of beauty in the world, whether in art, music, or literature. Something as commonplace and absurd as a goldfish becomes a great treasure when seen through Klee’s eyes. Alfred Hitchcock once claimed that Klee was his favorite artist. The director who saw everyday reality and turned it on its head to shake out all the strange and brutal beauty clearly recognized a kindred spirit in the gentle violinist who charmed the ladies in his youth and charms the world even today.
Posted by Bob at 12:01 AM