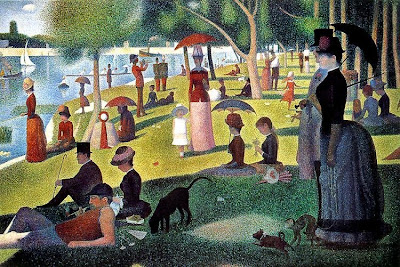 As we gathered ourselves to leave after watching Wall-E on Alex’s first trip to a movie theater, I looked up during the credits just in time to see an homage to Georges Seurat’s Sunday Afternoon on the Island of La Grande Jatte (above, from 1884-1886). Seurat’s placid park scene has become one of those comfortable pieces of cultural furniture, like the Mona Lisa or Michelangelo’s David. Born December 2, 1859, Seurat would probably be quite dismayed by such a development. As James H. Rubin argued in Impressionism and the Modern Landscape: Productivity, Technology, and Urbanization from Manet to Van Gogh (reviewed here), Seurat and his friend Paul Signac developed pointillism as a more scientific style to mimic technological progress when Impressionism had grown too mainstream and failed to address the changing industrial world or the populist leftist politics emerging with the rise of the modern middle class. It’s impossible today to understand just how much a revolution in the sense of rebellion Seurat’s paintings and style was at the time. The optical theories upon which Seurat based his carefully placed dots (Sunday Afternoon took over two years to finish) seem commonplace today, but at the time challenged cherished ideas of how we perceive the world. As hard as it is to believe now, Seurat was a rebel. 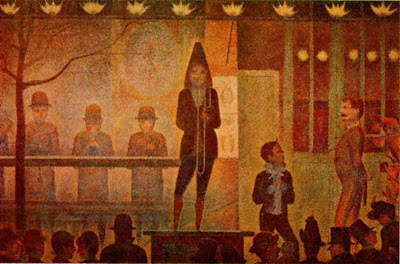 Two years after finishing Sunday Afternoon, Seurat painted The Sideshow (above, from 1888). Moving inside from the bright light of the day, Seurat paints a scene lit only by gas footlights. The brilliance of his outdoor scene gives was to the murky half darkness of the stage upon which the performers caper. In The Sideshow, Seurat not only breaks down color into tiny pieces but reduces the scene and the people in it into simple shapes. The musician at the center morphs into a triangle resting on top of a rectangle, with a lighter-colored circle for a face. Seurat creates an overall impression of cold, inhuman, mechanized precision, as if the background and the characters were stamped out in metal by an assembly line. If Sunday Afternoon shows the mixing (or lack of) between the socioeconomic classes, The Sideshow shows how popular, lowbrow entertainment belongs solely to the lower classes and how such diversions may have a deadening effect on their minds, growing as murky as the dim lights around them. 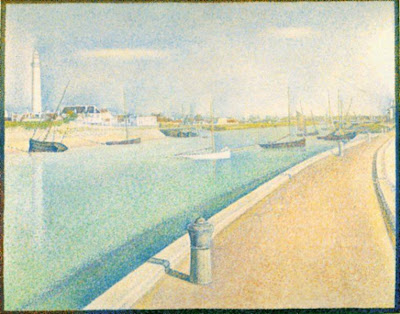 Of course, it’s easy to go overboard on the cultural and socioeconomic content of Seurat’s work. The first thing that comes to my mind when seeing Seurat’s Le Port de Gravelines (above, from 1890) is not the role of the shipping industry in late nineteenth century France but the beauty of the sweeping curve of the bank as it hugs the blue water while the powder blue sky echoes above. Seurat seems comfortable today because his style is irresistibly sensual. Like Cameron in that scene in Ferris Bueller's Day Off, we can’t believe the magic trick of all those dots evolving into a recognizable face. Sadly, Seurat died in 1891 at the age of thirty-one, just a year after finishing Le Port de Gravelines. Like so many other young rebels, Seurat never had the chance to grow old and, perhaps, change his spots. Reassembling what Seurat first meant by his work is as daunting a challenge as guessing how he himself would have connected those dots decades later.
Posted by Bob at 12:01 AM

Despite the average Pixar fan who knows to sit for the ending credits, I've not seen anyone note that the credits following include a near complete history of art. Even an artist friend of mine vowed to return to the theater just to make a point not to miss these references.

Perhaps Seurat's work was the most recognizable in the parade of works from cave paintings to 20th Century art.

Nice to see someone noticed.