The Influence of Anxiety 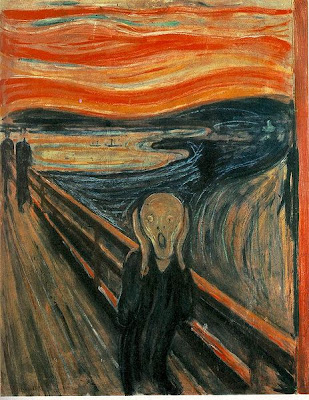 Edvard Munch’s The Scream (above, from 1893) now belongs to that select club of works of art that reach into mainstream international culture even to people who know little about art. Born December 12, 1863, Munch would be surprised by the appeal of his works today considering how little known he was for most of his life. It wasn’t until 1944 that Munch’s work was shown in America, and only then because of his anti-Nazi stance during the German occupation of his native Norway during World War II. Even his homeland failed to appreciate Munch’s art until Germany and the Expressionists saw a kindred spirit in Munch and exhibited Munch alongside such artists as Paul Cezanne, Paul Gauguin, and the other great “discovery” of the Expressionists, Vincent Van Gogh. Today, Munch’s imagery serves as shorthand for the modern condition of alienation and anxiety. The strange, open-mouthed figure on that bridge bathed in bizarre red and orange light screams for us all. 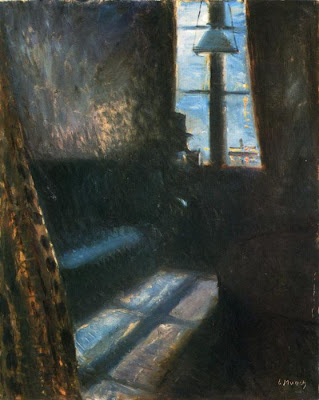 Although Munch could be sociable when he wanted to be, developing deep, if complex friendships with fellow artists such as August Strindberg, the general impression I get from what I’ve read of Munch is that he was for the most part a private, introspective person. Munch’s Night in St. Cloud (above, from 1890) illustrates introspection beautifully, posing a top-hatted gentleman near the window who is barely noticeable in the darkness. The moonlight seeping through the high window casts a shadow on the floor that resembles a cross, perhaps suggesting that the figure is musing on the God’s presence, or lack of, in the world. Instead of a scream of angst, we hear here the silence of anxiety stored up to the point of exploding. Dressed in a top hat and, presumably, other formal wear, the man either anticipates a journey outside or has just returned from his travels and is too preoccupied to undress. In this image of quiet, we can sense the disquiet of the man’s soul. 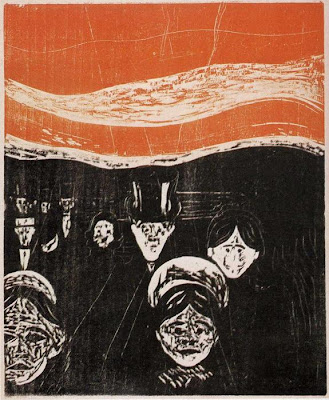 In the woodcut titled simply Anxiety (above, from 1896), Munch gathers together a group of faces to represent the public sense of anxiety generated by the anxiousness of the individual. Anxiety anticipates the work of someone like George Tooker, who paints the specific brand of alienation and psychic pain found in twentieth century America. Ingmar Bergmann, the Swedish director of many tales of Scandinavian anxiety (Wild Strawberries and Persona are my personal favorites), approximates the atmosphere of a Munch painting in film better than any other filmmaker. In 1930, a burst blood vessel in Munch’s eye damaged his vision severely, cutting back on his ability to see and, thus, paint. Yet, Munch continued to do his best, strangely even thriving in a way on his disability, as if this one added obstacle made the race more interesting as he lived into his seventies. For an artist, nothing could be more angst-inducing than losing your eyesight, but Munch took that misfortune, as he had with all the other misfortunes of his life, and transformed pain into paint. Annie and I almost saw the 2006 MoMA exhibition of Munch work, but Annie, who was very pregnant with Alex at the time, suddenly took sick and we had to cancel. It was a very anxious day. Munch would have loved it.
Posted by Bob at 12:01 AM

Munch's Scream does seem to capture the spirit of the times which may explain the popularity of the image in popular culture. The same rationale may apply to the popularity of Thomas Kinkade's artwork. Kinkade's images of idyllic cottages are comforting to the viewer. Grant Wood's American Gothic is another iconic image popular with Americans.