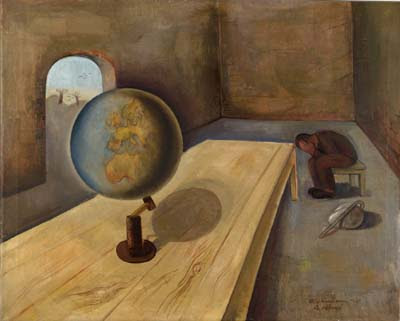 No other artist painted the horror of the Holocaust from the inside like Felix Nussbaum. Born December 11, 1904, Nussbaum and his family met their end at Auschwitz in 1944 after more than a decade of cheating death at the hands of the Nazis. When Nussbaum painted The Refugee (above, from 1939), he already knew what fate held in store for him and the rest of the Jews of Europe. Using the Surrealist style he developed over years of study, Nussbaum presents the surreal realization of madness on a global scale. The man sitting at the end of the long table opposite the globe that dominates the room knows there is no escape. The room itself seems like a prison cell. Outside, the trees are bare and black ravens circle ominously. Nussbaum found himself a refugee with no hope of refuge, trapped within the Europe of his birth and doomed by a religion he never fully embraced. The sense of anguish and despair is palpable, even without seeing the man’s face. 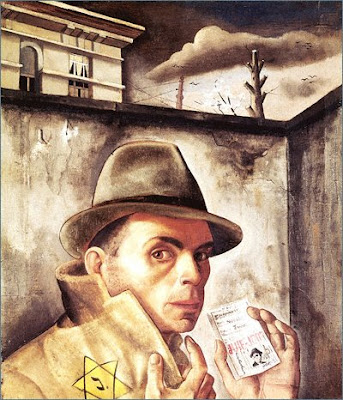 Nussbaum fought back against Nazi ideas about race and art early on. When the Nazis staged their infamous “Degenerate Art” exhibition, Nussbaum contributed works to a counter-exhibition. In 1940, the Nazis captured Nussbaum and his wife and placed them in a concentration camp in the south of France. Two years later, the Nussbaums escaped and fled to Belgium. During that time, friends helped Nussbaum hide and provided him with paints and canvases, with which he painted works such as Self-Portrait with Jewish Passport (above, from 1943). Nussbaum paints himself as clearly the hunted rather than the hunter. Although he never actually wore in public the Star of David badge imposed on Jews by the Nazis, Nussbaum holds the star in this self-portrait, along with the passport that could never be used to escape. One month before the Allies liberated Brussels, the Nussbaums were captured again and eventually sent to Auschwitz. 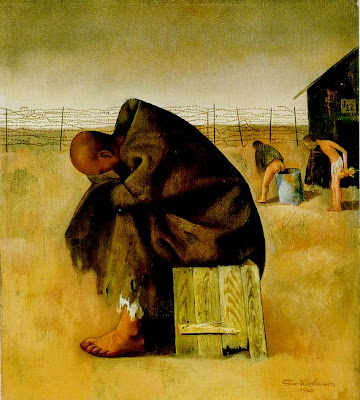 Nussbaum painted many works of his time in the camps during his years of freedom, including In the Camp (above, from 1944). These brutal, dehumanizing scenes show life in the camps with almost documentary accuracy. The surreal landscapes of Giorgio de Chirico, one of Nussbaum’s early heroes, take an even more sinister turn in these paintings. Perhaps only a Surrealist painter could approximate the upside down world of the Holocaust, where reason itself ceased to exist. The man who held his head in his hands in The Refugee in 1939 returns to face his final days. Sadly, Nussbaum’s work was forgotten after the war. His reputation almost died with him. Not until 1971 were his surviving works exhibited again. Nussbaum’s reputation soon spread and a museum was built in his native Osnabruck in 1998. “Never forget” has become the mantra of those who keep alive the memory of those who suffered through the Holocaust and who dedicate themselves to never letting it happen again. Felix Nussbaum never flinched from the sight of his oncoming destruction and painted works that will always remind us of his courage and the need to indeed never forget.

Thanks for this post (and for your interesting blog I just discovered) - I had never heard of this artist. We visited Auschwitz earlier this year, a devastating experience.

Two of your sentences were a surprise (to me).

a] Felix Nussbaum and his family met their end at Auschwitz in 1944 after more than a decade of cheating death at the hands of the Nazis; and

b] Nussbaum fought back against Nazi ideas about race and art early on. When the Nazis staged their infamous Degenerate Art exhibition [in 1937], Nussbaum contributed works to a counter-exhibition.

I've not seen any reference to a counter exhibition in 1937. In fact the Degenerate Art Show was itself a counter-exhibition to the Great German Art Exhibition of 1937.

many thanks for any information
Helen Webberley
http://melbourneblogger.blogspot.com/

Thanks for dropping by and commenting.

Technically, the Degenerate Art exhibition wasn't a true protest-style, counter-exhibition in that the Nazis presented both the Degenerate Art and Great German Art Exhibitions. They were counter-exhibitions in the sense that the Nazis were trying to draw a contrast between the two. Nussbaum participated in a smaller, truly protest-style exhibition featuring the art of Jewish artists already oppressed by the Nazis. There's not much known about that show because it was closed down pretty quickly.

I'm not sure what you mean about the details of Nussbaum's death. The several sources I checked all say that Nussbaum and most of his immediate family died in the camp in 1944. He may have some living descendents, but I haven't seen anything about them.

Thanks, again, and Happy Holidays!