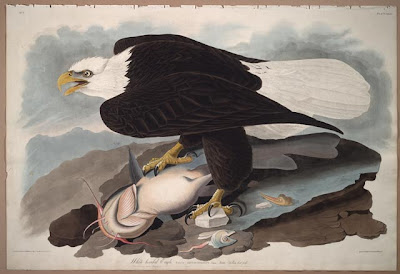 Growing up in the city, I thought that anything other than a pigeon was an exotic bird. Now that I live in the suburbs, I get a little more avian variety, but nothing like that found in the works of John James Audubon, the father of bird watching in America. Born April 26, 1785 in Haiti on his father’s sugar plantation, Audubon, the illegitimate child of a French naval officer and his mistress, spent most of his youth on the fly, forced to flee to France after a slave rebellion and then forced to move to America when conscription into the Napoleonic Wars loomed. His peripatetic ways perhaps helped form his early affinity for birds. "I felt an intimacy with them,” Audubon once said, “bordering on frenzy must accompany my steps through life.” Illustrations such as that of the Bald Eagle from Audubon’s landmark Birds of America (above, from 1827-1838) have made Audubon the most famous naturalist-illustrator in English. In addition to showing these creatures in great detail, Audubon took pains to paint them as if alive, such as showing the Bald Eagle feasting upon a fishy meal. The eye of the decapitated fish almost seems alive with regret at the sad turn of events. 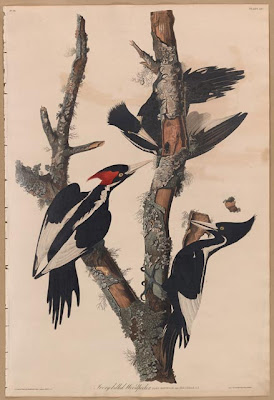 Audubon actually began his nature trek in the Philadelphia area. After Quaker women nursed him back to health from a bout of yellow fever he caught upon entering America, Audubon traveled to his father’s farm west of Philadelphia. In his travels, he may have seen Charles Willson Peale’s museum of natural history and Peale’s many paintings of wildlife modeled on stuffed birds and animals found in the museum. Soon, Audubon himself was catching, killing, and stuffing birds for his watercolors. Whereas Peale and others were content to paint the outward appearance, Audubon sought to recreate the bird as it was in life, as in his painting of the Ivory-Billed Woodpecker (above, also from from Birds of America, 1827-1838). These woodpeckers ravage the bark of the tree dramatically, perhaps more voraciously than in real life. Audubon realized that his subject, as fascinating as he himself found it, needed to be “sold” to the public. 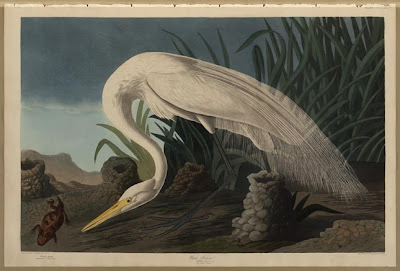 When Audubon assembled his Birds of America, he arranged the plates to accentuate the contrasts in drama of different works, looking at them more as art than science, although there certainly was a scientific value in his work. Birds of America consists of 435 hand-colored, life-size prints of 497 bird species. Using engraved copper plates measuring 39 by 26 inches, Audubon brought birds such as the American Egret (above, from Birds of America, 1827-1838) into the homes of those wealthy enough to afford his book. Because of the individual beauty of each of these works, part of which comes from the life and death drama of eat or be eaten, such as the egret eyeing its dinner crawling before it, most copies of Birds of America have been torn apart into the single pages. Some thieves working in rare prints have torn pages out of rare library copies of Birds of America and hidden them on their person. Audubon’s realistic approach to nature and nature’s creatures helped inspire a whole legacy of artistic bonds between American artists and the world around them.
Posted by Bob at 6:20 PM