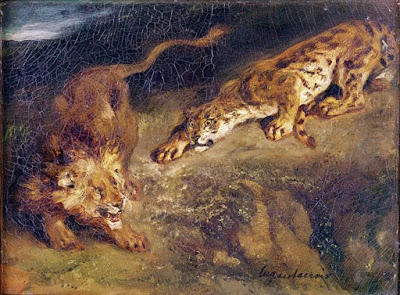 Few artists have captured the power and beauty of savage beasts like Eugene Delacroix. Born April 26, 1798, Delacroix painted inspirational scenes of the struggle for freedom such as 1830’s Liberty Leading the People and brought the exoticism of the Orient to France in works such as 1828’s Death of Sardanapalus. However, I’d like to focus on how Delacroix viewed the king of the beasts in works such as Tiger and Lion (above, from 1828-1829). There’s certainly a great eye for realistic detail, but what separates Delacroix from those merely copying nature is how he dramatizes it. The almost human cast of the eyes of the tiger and lion as they circle one another, each looking for an opening to strike, speaks as much of mankind’s bloodlust as any animal instinct. Oddly, Henri Rousseau saw this painting exhibited at the Paris Salon and patterned the kindler, gentler animals of his paintings after Delacroix’s anthropomorphized bestiary. As revolution raged in Delacroix’s Europe, however, it was difficult for the politically engaged artist not to believe that it was truly a jungle out there and to populate his art accordingly. 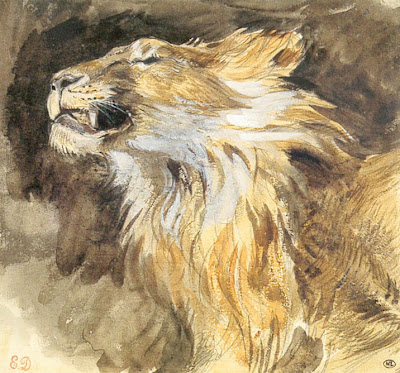 My favorite Delacroix lion appears in his 1841 watercolor above. The freedom and speed of watercolor as a medium permitted Delacroix to convey that same sense of movement and unbridled energy. I’ve always thought that Delacroix’s big cats address the tension of William Blake’s Tyger, Tyger even better than the poet’s own illustration. It’s also fascinating to me to consider that as Delacroix paints these creatures inspired by his experience of revolution and war, Edward Hicks is in America painting his Peaceable Kingdom series of doe-eyed lions laying down with lambs in a pacifist paradise. Looking ahead to future conflicts, I see some connection between Delacroix’s animals and those of Franz Marc, who similarly captured the power and tension embedded into the fabric of the tiger as a physical manifestation of the boiling pressures that soon would explode in the form of World War I. 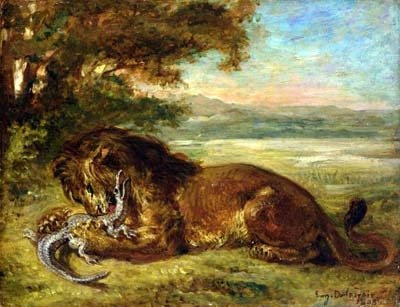 I used to laugh at some of Delacroix’s later animal images, such as Lion and Alligator (above, from 1863). Some of the combinations reminded me of monster movie match-ups like Mothra versus Godzilla. In Lion and Alligator, the tiny reptile doesn’t stand much of a chance against the cruel claws ready to tear it apart. As much as I try to read this work politically, I can never decide if the lion represents the people, tearing into the cold, reptilian heart of royalty through revolution, or if the lion represents the established power, crushing the hopes of the little people struggling to be free. At the very least, it’s an image of inequality, a vast departure from the more evenly matched tiger and lion of 1828. Perhaps Delacroix had wearied of the battles strewn across his life and saw wars for what they essentially are—the bane of the voiceless caught in the crossfire—which is as true in nineteenth century Europe as it is in the twenty-first century Middle East.