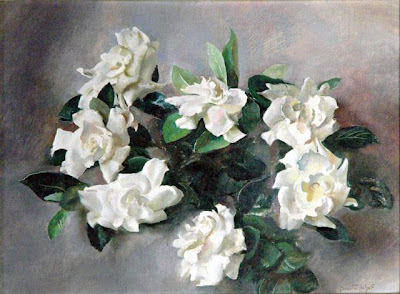 Anyone familiar with the history of the Brandywine School of art knows the well-worn litany of men who shaped that tradition: from the founder, Howard Pyle; to Pyle’s student, N. C. Wyeth; to N.C.’s son, Andrew; and to Andrew’s son, Jamie. Behind that great wall of descent, however, lurks the great ladies of the Brandywine tradition: from Pyle’s student, Jessie Willcox Smith, to N.C.’s three talented daughters— Henriette, Carolyn, and Ann. Wyeth Women—An Exhibition of Paintings by The Daughters of N.C. Wyeth at the Somerville Manning Gallery brings these talented women out of the shadows of the men of the Brandywine legacy and will hopefully allows such works as Henriette’s Gardenias (above) to find their place in the pantheon beside their father, brother, and nephew.

As the catalogue to the exhibition points out, Henriette was truly the “prodigy” of the family, the talented child upon whom N.C. placed his highest hopes. When young, rough-and-ready artist Peter Hurd descended upon Chadds Ford to learn from N.C., Henriette found a partner in both life and art. After their marriage, they moved back to Peter’s native New Mexico. Perhaps because of that distance, the subject matter of Henriette’s work goes in a different direction from that of her brother Andrew, which is so inextricably rooted to Chadds Ford. Henriette gained much success in painting portraits of actress Helen Hayes, Mrs. John D. Rockerfeller III, and First Lady Pat Nixon, but it was in her still lifes, such as Gardenias, that she found a gentler subject. Henriette’s ability to depict the shimmering textures of seashells and the almost nothingness of feathers demonstrates not only her skill but the vast departure she made from the world of her father and the sturdy action figures of his illustration work. 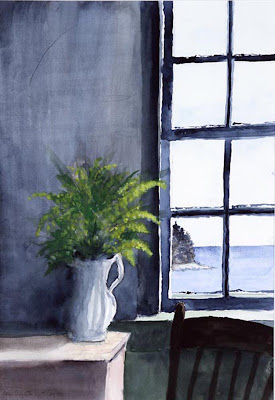 N.C.’s youngest daughter, Ann, showed early promise as both a composer and an artist. A musical composition she wrote for her father sadly became his requiem when he died in 1945. Like Henriette, Ann married one of her father’s students, John McCoy, himself an outstanding watercolorist and an artistic confidant to Andrew. Thanks to her husband and brother, Ann continued to learn the medium of watercolor and created works such as Yellow Flowers in Vase (above). Like Andrew, Ann painted scenes of the world around her in Chadds Ford. Unlike Andrew, however, Ann’s inspiration came more from the domestic than the rural. The tradition of Wyeth women continues today through Ann’s daughter, Anna B., who studied for some time with N.C.’s second daughter, Carolyn. 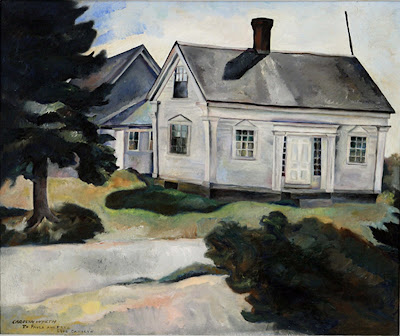 To me, Carolyn is the most fascinating of the Wyeth women. Her paintings show a restless, almost nervous energy, as in The Jones House (above). The unpopulated nature of almost all of her works (even in The Jones House, which was a gift to friends) suggests both a rejection of the world at large and loneliness. After N.C.’s death, Carolyn lived in her father’s house and taught there. “If she liked you, she loved you. But if she didn’t, watch out,” Karl J. Kuerner III, one of Carolyn’s students remembers. Jamie, Anna B., and a host of other artists went through Carolyn’s school, many of whom later went on to teach themselves, spreading her influence even further. In many ways, Carolyn continued the teaching tradition begun by Pyle by opening her school right there in Chadds Ford. With the centennial of Carolyn’s birth coming up next year, a catalogue of her works is being compiled. I myself am interested in pursuing her story, not as the gruff eccentric but as the serious artist and teacher of art. Andrew called his sister Carolyn the best critic of his art, even sharing the secret of the Helga paintings with her and her alone during their creation. Unfortunately, Carolyn sought the shadows for the greater part of her life. Perhaps this exhibition and further scholarship on her can coax her into the spotlight she so richly deserves.

The bond between the children of N.C. Wyeth transcended place and time. Each stemming from that common root of imagination flowered in their own way. To look at Henriette’s painting is to see hints of Andrew filtered through N.C. and Peter Hurd. To look at Ann’s art is to see the domestic bliss and powerful sense of place fostered by the nurturing education environment of her father. To look at Carolyn’s work is to see pure, rough-hewn honesty of her father, and to understand why Andrew valued her imput after their father’s death in developing his own vision. Those connections don't diminish these women but, rather, should enhance just how strong their works are next to the more recognized works of the Wyeth men. Wyeth Women—An Exhibition of Paintings by The Daughters of N.C. Wyeth brings the larger picture of the Brandywine School into sharper focus and hints at the still-to-be-written chapters of the Wyeth dynasty’s story.

[Many thanks to Somerville Manning Gallery for providing me with a copy of the catalogue to Wyeth Women—An Exhibition of Paintings by The Daughters of N.C. Wyeth and for the images from the exhibition.]
Posted by Bob at 2:45 AM

those are lovely work of arts!