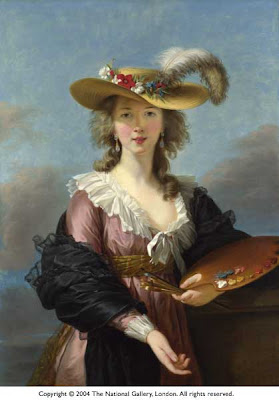 When 8-year-old Marie Elizabeth Louise Vigee-Le Brun’s father, an artist, saw a drawing she had done of a man’s head, he announced that she, too, would be a painter, and a great one. Born April 16, 1755, Le Brun kept that drawing with her for the rest of her life, cherishing that memory of her father, whose death in 1768 devastated her. Although she grew proficient enough as a portraitist at the age of fifteen to support herself, she rushed into an unwise marriage at seventeen. Her Self Portrait in a Straw Hat (above, from 1782), based on Rubens’ The Straw Hat, which she saw in person, demonstrates how Le Brun saw herself as part of the same artistic community as Rubens, Rembrandt, and Van Dyck, yet never found a peaceful domestic situation in which she could find solace. Bobbing like a buoy on the tempest of the French Revolution, Le Brun’s talent always kept her afloat even as her husband kept her weighted down. 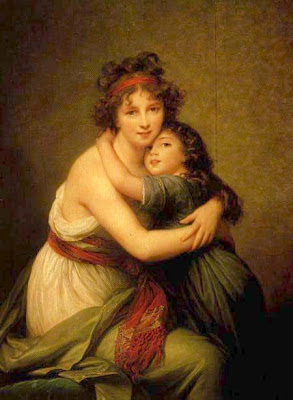 Le Brun’s Portrait of the Artist with Her Daughter (Mother and Daughter) (above, from 1789) shows the artist with her nine-year-old daughter Julie. Le Brun married an art dealer named Jean Baptiste Pierre Le Brun in 1774. Jean recognized Elizabeth’s gift early on and decided to exploit her very profitable portrait career. Jean’s gambling addiction and otherwise deadbeat lifestyle drained the artist’s resources just as she was beginning to reach the height of her success, especially in her portraits of Marie Antoinette. That same royal connection later proved troublesome in the wake of the French Revolution. Le Brun fled with her family to Italy, Austria, and later Russia, painting the rich and powerful at each stop. Le Brun’s royalist sympathies seem troublesome even today, but she truly seems in retrospect to be above the political fray, painting her royal subjects as people rather than embodied ideologies. 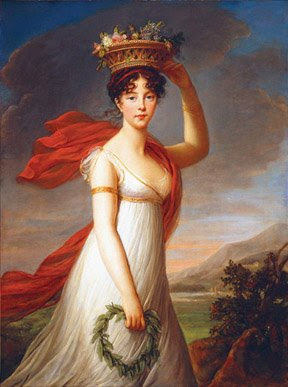 The one constant in Le Brun’s life was her daughter Julie, whom she painted as Flora in 1799 (above). Two years before this painting was made, Julie herself entered into a hasty marriage against her mother’s wishes. Julie soon regretted her actions, but the die was cast. She continued to pull on her mother’s heartstrings, consorting with the wrong type of men and repeating all the mistakes her mother had made. Julie even returned her mother’s love with a refusal to live under the same roof with her after the marriage fell through. Despite all these rejections, Le Brun’s daughter’s death pained her infinitely more than that of her husband. “All the wrongdoings of the poor little thing were blotted out," Le Brun wrote in her memories of her daughter’s death. "I saw her as in the days of her childhood as I still see her. Alas! she was so young! Why did she not outlive me?" Today, Le Brun would be called codependent, a woman wise in art matters but foolish when it came to men. Considering how far she had to climb to achieve her place in nineteenth century art, you have to wonder what held her back from taking that final step towards independence in her personal life.
Posted by Bob at 5:55 PM