The Parade’s Gone By 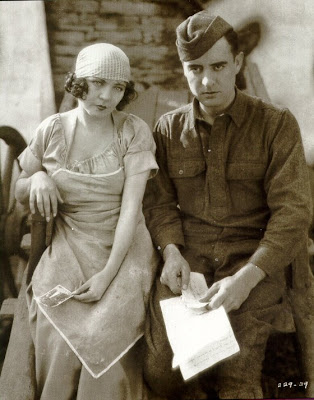 Thanks to a friend who’s obsessive when it comes to the work of Andrew Wyeth, I recently got to see a never-released short film done in the mid 1970s by director King Vidor called Metaphor, in which Vidor receives a fan letter from Wyeth and travels from California to Chadds Ford, Pennsylvania to visit Wyeth and discuss the connection between Wyeth’s art and Vidor’s 1925 film The Big Parade. (Costars Renée Adorée and John Gilbert appear above in a still from the film). The film only exists publicly on a DVD that was distributed by a French film magazine. Tag Gallagher in his “How to Share a Hill” explains far better than I can the cinematic ties between the painter and director, but I had to share some of my own reactions to seeing the film, which, as Vidor himself says, may be the first time a major artist acknowledged that a movie had influenced his art. 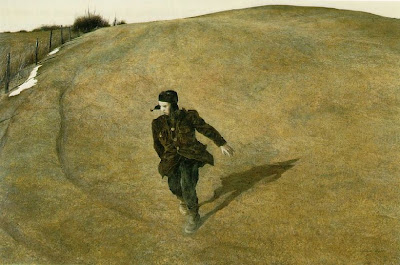 Wyeth appears so rarely on film that any footage is fascinating, but this work is doubly interesting because he’s in the position of the fan, totally in awe of King Vidor. N. C. Wyeth took 8-year-old Andy and the rest of the clan to see The Big Parade when it came out in 1925 on a big screen in Wilmington, Delaware. In the documentary, Wyeth brags that he’d seen The Big Parade over 180 times in his life. (Since Metaphor is easily 30 years old, that number most likely tops 200 now.) Wyeth clearly connected with the story of a young man (Gilbert) enlisting for World War I against the wishes of his sweetheart, falling for a young French girl (Adoree) while deployed, wounded in battle (losing a leg), returning home to find life after “the big parade” to be unsatisfying, and then returning to the French girl he’d left behind and true love. In that reunion scene, Gilbert comes limping over a hill very similar to that Wyeth painted in Winter 1946 (above). When Wyeth’s wife, Betsy, first saw the film, she pointed out the similarity to Wyeth and it dawned on the artist that many of his works had been subconsciously influenced by the movie. (Betsy’s appearance in Metaphor may be the only existing footage of her speaking about her husband’s art.) The fact that the images from The Big Parade lingered in Wyeth’s vast visual subconscious and bubbled up unawares in many of his works gives us just a tantalizing glimpse into the way that his mind works when creating art. 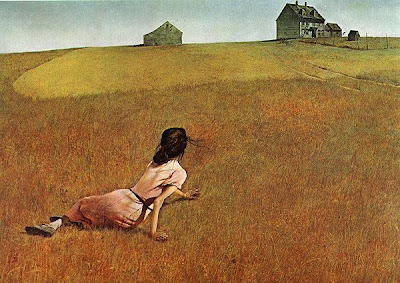 Even Wyeth’s most famous work, Christina's World (above, from 1948) “borrows” from that hilltop scene in The Big Parade to an extent. When I began watching Metaphor, I was prepared to learn that Wyeth was a fan of silent films. (I’m a big fan of silent films myself. The title of this post alludes to Kevin Brownlow’s great book on the subject. I’m in the middle of a personal Louise Brooks film festival thanks to Netflix.) It became clear after a while, however, that Wyeth wasn’t a fan of silent films but of this one particular silent film. When Wyeth asks how the special effect of Gilbert’s missing leg was achieved, Vidor answers that Lon Chaney, Sr., the great silent film actor and master of early makeup effects, helped them, but the name doesn’t seem to register with Wyeth. I might be wrong, of course, and reading Wyeth’s expression wrong, but his lack of enthusiasm over hearing that name in contrast to his squeals of delight over every other revelation by Vidor leads me to think that Wyeth connected with this one film and never, ever let go. The associations with his late father N.C., the ostensible “subject” of Winter 1946, who first took Andy to see the movie, and then with Karl Kuerner, Sr., a former German World War I soldier, who posed for some of Andy’s greatest portraits, sometimes in uniform, made this film a permanent part of Andy’s psyche. Each repeated viewing simply reinforced those associations. The lack of a soundtrack added to the film’s power in that Wyeth could provide his own internal soundtrack as he drank in the visuals.

As silly as it may sound, this link between Wyeth and The Big Parade reminded me of the origin of the Batman character. For those of you who aren’t comic nerds like myself, Bruce Wayne’s parents were killed after seeing The Mark of Zorro. Associating their death with that movie, Bruce vows to become a caped hero himself, eventually coming up with the Batman persona. Wyeth obviously doesn’t fight crime, but the power of cinema to cling to the senses and intertwine with emotions is the same in both cases. Wyeth himself has claimed that Winter 1946 marked the beginning of his real career as an artist. It does in the sense that it commemorates his late father while simultaneously declaring his stylistic independence. In addition, it marks the beginning of Wyeth’s use of the amazing transformative power of his visual memory, taking those “stills” from The Big Parade locked away in his memory and using them to create his own artistic vision. Wyeth indeed “shares” this hill, as Gallagher asserts, but he also makes it uniquely his own.

[Many thanks to my friend (who prefers to remain anonymous) for providing me with a copy of this “bootleg” documentary and for discussing the film with me, thus helping me shape my thoughts about it.]
Posted by Bob at 6:24 PM