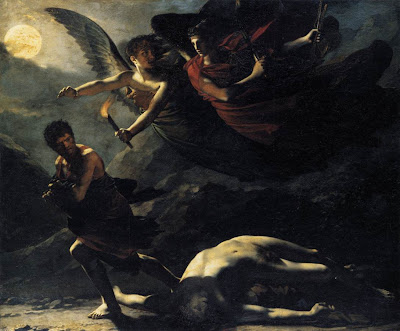 "Under the dark veil of the night, in a wild and remote place, the greedy criminal murders his victim, snatches his gold and looks to make sure there is no sign of life to betray his fearful deed. He does not see that Nemesis, that terrible aid to justice, is pursuing him, and is about to seize him and deliver him up to its unyielding assistant," wrote Pierre-Paul Prud’hon of his painting Justice and Divine Vengeance Pursuing Crime (above, from 1808). Born April 4, 1758, Prud’hon painted in the nineteenth century like a Renaissance master time-traveling to the age of Romanticism. Prud’hon painted chiaroscuro as dramatically as Caravaggio in both religious and secular scenes. He painted Justice and Divine Vengeance Pursuing Crime for the Palace of Justice in Paris—an unforgettable visual statement that crime doesn’t pay. 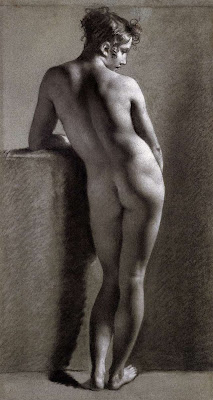 Like his contemporary David, Prud’hon fell under the spell of neo-classicism, especially when depicting the nude figure as in Nude Viewed from Behind (above, from the 1810s). While other artists of his time created such drawings as preliminary work for paintings, Prud’hon employed such draftsmanship for its own sake. You can see hints of da Vinci-esque sfumato in the gentle shading of the figure, who seems more like three-dimensional sculpture than two-dimensional drawing. Although critics often praise Prud’hon for his realism, the figure shown here is clearly part of the tradition of the idealized human form. 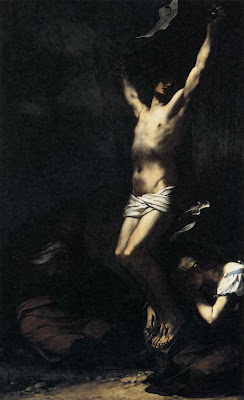 When Prud’hon’s mistress and student, Constance Mayer, took her life in 1821, he fell into a deep depression. Prud’hon’s wife and the mother of his children had gone insane years before, so Constance had kept him and his family together. Prud’hon died just two short years later. Before his death, Prud’hon painted his greatest masterpiece, his Crucifixion (above, from 1822). The coiled tension of Christ’s body exemplifies Prud’hon’s mastery of the human body. By turning Christ’s face away from the viewer, Prud’hon shows psychological depth, choosing to leave that moment of anguish suggestively hidden rather than clearly depicted. Knowing the depths of his own anguish, Prud’hon couldn’t bring himself to give Christ’s pain a face, literally. Unfortunately, Prud’hon achieved the midnight blacks of many of his works through the use of bitumen, which has made his paintings decay badly despite the best efforts of conservators. While some artists seem to fade away, Prud’hon literally retreats into the darkness of his own works.
Posted by Bob at 6:04 PM