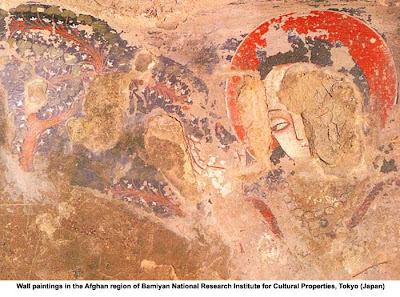 When the Taliban destroyed the amazing giant Buddhas of Bamiyan in 2001, the world mourned the loss of a great, if little known cultural landmark. Few researchers had ever ventured into that region of war-torn Afghanistan. After American forces invaded post-9/11, scientists could finally analyze that site and discover what lay in the caves behind the giant statues. Those scientists now report finding in the caves paintings (shown above and below) dating from the fifth to the ninth century AD that were done in oil, centuries before Europeans “discovered” the technique of oil painting in the fifteenth century. It apparently took this long for them for the necessary experiments to be performed to establish the composition of the paintings, which are in bad shape from the passage of time, exposure to the elements, and exposure to the iconoclastic vandalism of the Taliban, but the evidence is clear. 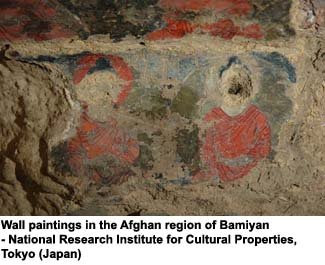 All the standard histories of the development of painting state pretty confidently that oil painting began in Europe in the fifteenth century, replacing previous techniques of applying pigment using egg or glue prepared from animals. All those histories now need to be rewritten. In America, this story is getting some play, but not nearly as much play as I think it merits. Western civilization wants to believe that they invented everything, leaving “backward” Middle Eastern and Asian cultures in the dust. This story really crushes that narrative, which most people with any understanding of the Middle East’s contributions to mathematics and science or Asian achievements in technology and exploration didn’t accept anyway. The fact that such a landmark of civilization happens first in Afghanistan, the home of our ostensible “enemy,” and was most likely painted by Silk Road artisans bringing the technique from China, another “enemy,” albeit one heavily investing in America right now, hurts those who see everything as a contest for supremacy. It is literally dis-Orienting in the sense that we have “lost our East” (the original meaning of disorient). Personally, I see this as a great opportunity. 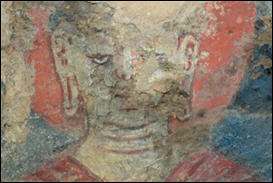 We now know that the first face painted in oil belongs not to Jesus Christ in fifteenth-century Europe but to the Buddha (above) in seventh-century Afghanistan. You can see this as some kind of race with winners and losers, if you want to, but I see it as proof of the power of other faiths and other cultures to match and even surpass Western culture in terms of development. We may have “lost our East” in terms of the failed fiction we chose to believe, but we can re-Orient ourselves to the truth through this revelation. The first step to peace may be an acceptance of the value of these other cultures, thus curtailing the dehumanization and debasement vital to finding the energy to wage war on another part of the world. Ironically, the Taliban’s destructive actions at Bamiyan may have provided the key to their ultimate downfall. I say all this knowing that the chances are slim that such a cultural turning point can have a larger impact on American society, which has made an idol out of historical and cultural ignorance, but I prefer to keep hope alive. Thinking that some good could come from the Taliban’s destruction of the Buddhas seems so very Zen. Buddha (and Jesus) would be pleased.

this is fascinating...cultural egocentrism is pervasive through all cultures but this is a good factual find .
You have a very nice blog here..

its a great place to connect with like minds.