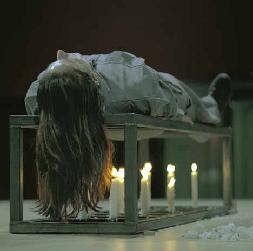 “I have always staged my fears as a way to transcend them,” remarked performance artist extraordinaire Marina Abramović in a recent profile in The New Yorker. With a new retrospective exhibition at the MoMA in New York—the first they’ve ever given to a performance artist—and a new biography and critical study of her work, Abramović seems fearlessly poised to escape the gulag of contemporary art and spring into the consciousness of the public at large after more than four decades of work. For those unable to see her in action live, Seven Easy Pieces, a film made of her 2005 series of performances at the Guggenheim, is the next best thing. For an artist who often specializes in shocking full frontal nudity, she seems poised to make a full frontal assault on the world at large. Please come over to Picture This at Big Think to read more of "Full Frontal Assault."


[Many thanks to Microcinema for providing me with a review copy of Seven Easy Pieces.]
Posted by Bob at 5:27 PM